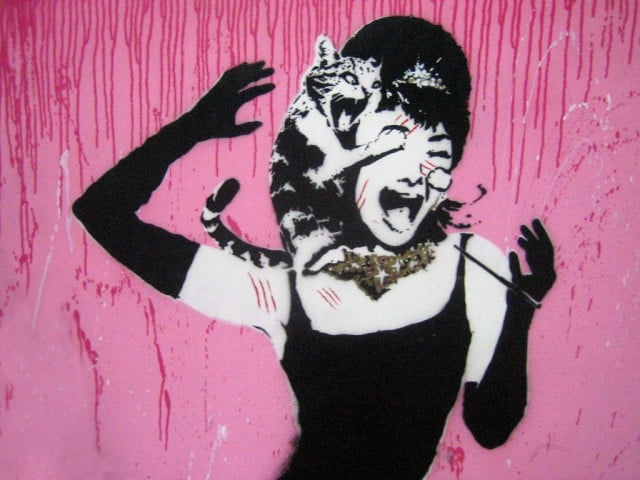 France isn’t all it’s cracked up to be. Sure, it’s full of gorgeous art, rich cuisine, and basically all the wine you can drink, but stray too far outside city limits, and you run the risk of falling prey to terrifyingly vicious beasts. Like, you know that scene in Beauty and the Beast where they’re all attacked by wolves? Imagine that happening to you… but with cats. Seriously.

Laugh all you like, but it happened to a woman walking her dog in the city of Belfort, a popular tourist destination on the Swiss border. At around 7pm this past Sunday, a half dozen feral cats descended on the 31-year-old victim and managed to knock her over, scratching and biting her so hard that they even tore one of her arteries. Luckily, the woman and her dog were rushed to medical treatment and survived the attack, though both are presumably traumatized for life.

Before all you anti-cat types rush in to paint this as the ultimate reason why dogs are better, though, you should know that this is highly unusual behavior even for feral cats. “The vet told us that, in his 20 years in the job, he had never seen such a thing,” The victim’s mother said to l’Est Republicain, a local newspaper. “He couldn’t find a single explanation for the cats’ abnormal behavior.” My guess is that after years of being hounded by notorious sexual abuser Pepe LePew with absolutely no help from authorities, all the cats banded together to take out their vengeance on an unjust society. Either that, or the recent heatwave in the region made them all kind of jittery. I feel you there, cats.

Police have warned British tourists in the area not to approach any of the feral cats in the area, but otherwise they appear to be at a loss over how best to handle the aftermath of the attack. They also estimate that about 8,000 feral cats are born in France every year due to people dumping their unwanted pets. Come on, France, don’t you have a Bob Barker equivalent over there to teach you not to do these things?

(via The Local, image via Dr Case)