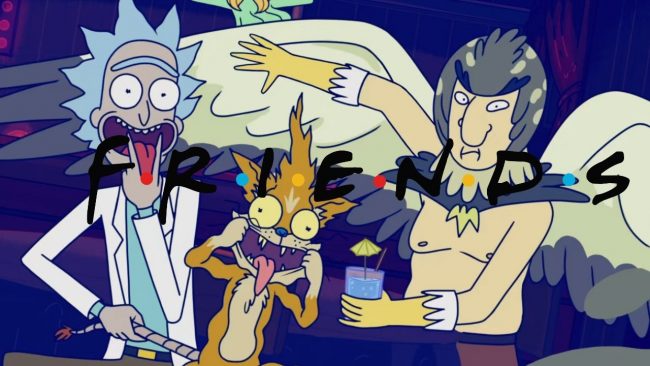 I’ll cop to the fact that I’m probably forcing this into becoming a regular beat here at The Mary Sue. But you know what? I don’t care. I like it when shows get the Friends theme mashup treatment. And I’m not alone in that, right? R-r… right… ?

Here, you’ll see that this time around, Rick and Morty got mashed up with Friends, and in some far off parallel dimension, you just know that this Rick and Morty intro is normal to them. To the lucky denizens of that world, their Rick and Morty show is full of hilarious, network television sitcom-level antics. Maybe this isn’t really YouTube. Maybe this is just a peek into another one of Rick’s modified cable boxes. I don’t know. I’m really hanging on this idea, aren’t I? Maybe I’ll stop. Maybe I won’t.

This video pulls from one of the strongest Honest Trailers gags, which is the re-done cast listing. I mean, you’ve got Birdman listed as The Batman, and you’ve got lawyer Morty set up as Saul Goodman, Attorney at Law. It’s a pretty solid mashup, and at under a minute, it’s definitely worth a watch.