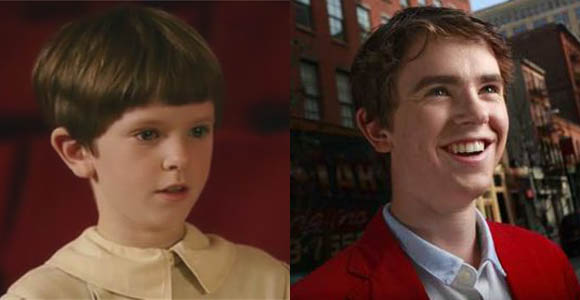 Freddie Highmore, whose adorable mug you may remember from Finding Neverland and Charlie and the Chocolate Factory, has just secured a role in A&E’s Psycho prequel. The actor will be playing Norman Bates. The rest on that disturbing news plus who will play his brother (his brother!?) after the jump.

We previously heard not only was this prequel, called Bates Motel, actually happening, but they were already far into the casting stage. Vera Farmiga is set to play Norman’s mother, Norma, in the series.

Highmore, who thankfully hasn’t asked Hollywood to call him Fred, Fredrick, (or his real name Alfred Thomas) yet, will play the role made famous by Anthony Perkins in the 1960 Alfred Hitchcock film Psycho. Just a handful of actors have played Norman Bates since Perkins. Kurt Paul played him in a TV film also titled Bates Motel while Henry Thomas played a young Norman just a few years later in televisions Psycho IV: The Beginning. And we’ll all try and forget Vince Vaughn’s take in the 1998 film remake.

“We are incredibly excited to start production on Bates Motel. We think our take on the Bates family will both be surprising and subvert expectations.  We can’t wait for people to check in,” writer/executive producer Carlton Cuse told The Hollywood Reporter. The prequel is focused on exploring Norman’s relationship with his mother, a relationship we all know led to some very bad behavior down the road.

Meanwhile, Norman’s brother has also been cast. Max Thieriot will play an older brother named Dylan according to THR. He’s “described as a petulant and rebellious James Dean-type.”

So, what do you think of this casting and the overall concept? Obviously actors aren’t meant to play just one type of role but I’m gonna have a hard time disconnecting Highmore from his previous child roles.