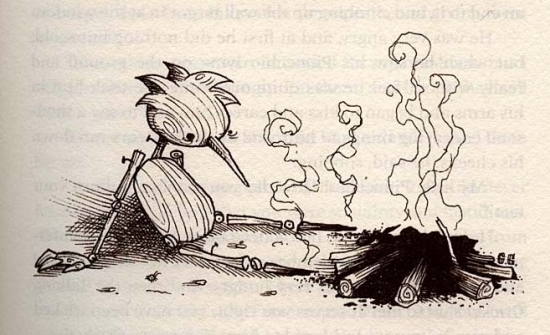 There was going to be a Jim Henson Company produced, Guillermo del Toro directed, and Mark Gustafson animated version of Pinocchio based on Gris Grimly’s illustrations, but Frankenweenie ruined it. Tom Waits was even going to be Gepetto. This is why we can’t have nice things.

The rumors of Pinocchio’s death may be greatly exaggerated, as the only news we’ve seen so far on the subject came from Grimly’s Twitter account. Grimly Tweeted on January 30th:

Short to the point update on Pinocchio for those inquiring: It appears that this is not the right time for such a superior-adventurous flick – @GrisGrimly

So what does Frankenweenie have to do with anything? Grimly also tweeted back to Twitter user @thinkbaker who commented to Grimly that he hopes the animated Goon movie does well enough so that “big kids like us can start to enjoy pg13 animation!” Grimly’s response:

@thinkbaker There are people like us out there. But they look at numbers. Frankenweenie was a box office failure to them. – @GrisGrimly

The tweets have since been deleted, perhaps under pressure from the studio, so the project is not officially dead. Box Office Mojo has Frankenweenie’s worldwide box office gross at just a hair over $67 million with a production budget of $39 million, so it wasn’t a complete bomb, or a runaway success. Was it bad enough to put Pinocchio on the chopping block? Grimly seems to think so.

The good news for Grimly fans though, is that he also tweeted that he was in talks with a studio about adapting his book Little Jordan Ray’s Muddy Spud. It would be great if it works out, but if a known property like Pinocchio can’t get off the ground there might be little chance for a more obscure book.

UPDATE: Looks like Gris Grimly sent an email to Bleeding Cool that clears things up:

I’m writing to clear up the rumor that has gotten started. It all started with misconstrued information that I passed along through my networks. But it has come to my knowledge that Pinocchio is indeed still kicking with interest from the studios. Although I thought it was going to lay quiet for a little while, I never thought it would be canceled. It’s too good.

Phew. We may still get this particular Pinocchio yet.