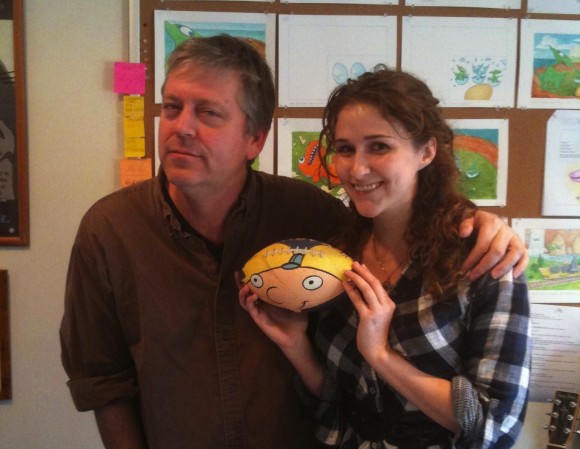 Francesca Marie Smith, who provided the voice talent for the be-unibrowed, Arnold-obsessed Helga on Nickelodeon‘s Hey Arnold!, conducted an AMA on Reddit yesterday (with the assistance of Hey Arnold! creator Craig Bartlett, also pictured above) and answered questions from fans, including how many actors played Arnold, who left her starstruck, and how the show was connected to The Simpsons.

Throughout the AMA, Smith discussed how she was home-schooled and what it was like to be a child actor.

Fans also got some non-questions in:

And Smith was totally amused:

She also talked about her favorite episode and meeting huge guest stars:

And then things got awesome when Smith “performed”: 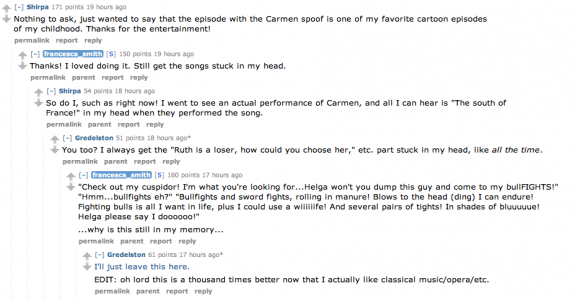 A question about the animation industry provided a nostalgic response:

The AMA went on for a few hours and offered insight into the prospect of “The Jungle Movie,”, Smith’s educational career, a long-lost/never-actually-made Helga spinoff, why she’s eyeing Glee, and the other famous Nicktoon performers she knew (Billy West! Billy West!). Very fun trivia: Helga G. Pataki’s middle name was Geraldine, after Gerry Laybourne, one of the executives of Nickelodeon who helped shape the brand and later founded Oxygen Media.

You can read the entire AMA here, or you can see the best of Helga on YouTube.