WHO IS EXCITED FOR PARTY TIMES? (I am excited for party times)

Wow, is it Friday already? Time flies when you’re gorging yourself on holiday treats and trying to ignore your family’s questions about your personal life. Speaking of which, the person we think you should be following on Twitter this time is Kate Beaton, whose recent family comics have been the highlight of our week.

Kate Beaton writes and draws Hark! A Vagrant,  an online comic that irreverently explores topics like obscure political history, Canadian culture, 18th century literature, musicals, “strong female characters,” and covers of Nancy Drew novels. If that all sounds pretty rife with humor, than you’re in luck, and you’re also probably a massive dork. Congratulations! One of us.

In fact, a sizeable chunk of now-iconic Internet memes can be traced back to Beaton’s art — like “I had fun once and it was awful,” “Then I will sit here consumed with lust for the rest of the evening” and “Ooh Mr. Darcy,” “What if your wife orbits my dick,” or even the “AWWW YISS” bread crumb duck.

Also, you know that creepy fat pony from that one episode of Adventure Time? That was very heavily inspired by a recurring Kate Beaton character as well, appropriately named “Fat Pony.” 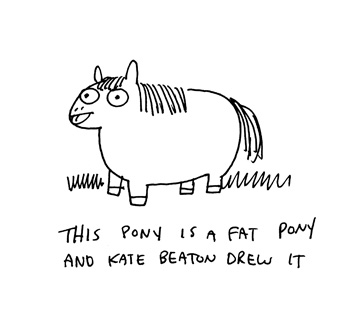 So it’s pretty likely that Beaton is responsible for at least one out of every ten or so times you’ve laughed at something on the Internet. Y’know, give or take.

Beaton often fills her Twitter with cute sketches and mini-comics that don’t go onto her main website, so if you’re already a fan of Hark! A Vagrant, then you’re missing out on some awesome bonus material if you’re not following her already. If you’re not a fan, then trust us — her sense of humor is fantastic, and her tweets are worth paying attention to.

In particular, Beaton’s been doing a series of personal comics on her Twitter for the holiday season that were all inspired by her family. They’ve all been nothing short of amazing. We wish our families were as folksy and hilarious, but unfortunately they are not.

We relate to this comic more than we comfortably care to admit.

This one too. Sorry, Mom.

Kate’s dad is clearly the best.

You know what? Her whole family’s the best.

When she’s not doing family comics, though, Kate’s Twitter is still pretty awesome.

anyway be nice to yourself online because there’s a million ways the internet is bending over backwards to make you feel crummy as is, right