Flies are also very unfulfilled in space due to lack of poop. 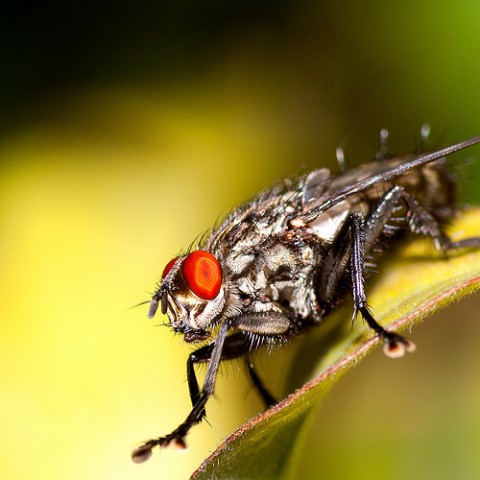 You’ve heard of butterflies and houseflies, but did you know there are…flies in space? Researchers at the University of California Davis hatched twelve Drosophilia “space flies” on the Space Shuttle Discovery to discover how microgravity affects their immune systems as well as our own.

In a study published last week in the journal PLOS ONE, the researchers explained that Drosophilia flies were chosen for the space adventure, because they “share many fundamentals of the immune system with mammals such as mice and humans.”

The flies were hatched on Space Shuttle Discovery to simulate the effect that microgravity may have on human immune systems. Then, they were brought back to Earth ten days later and exposed to two pathogens described by the study as “a fungus, which flies fight off through a pathway mediated by the Toll receptor, and a bacterial infection that flies resist through a gene called Imd (“immune deficiency”).”

Although flies raised in Earth gravity have no problem resisting the fungus pathogen, the space flies promptly succumbed to it (in a horrifying fashion, the results of which you can see here, if that’s your thing.)

However, microgravity had no impact on the flies’ resistance to the bacteria strain, showing that space may have had an adverse affect on their toll receptors but not their immunity gene. Thankfully, the researchers believe this microgravity reaction can be prevented to keep our astronauts (and future Mars Colony residents) healthy. Placing the flies in centrifugal machines to increasing the force of gravity improved their resistance to fungal infections.

That may save the lives of future flies (and humans), but tragically, it wasn’t enough for the twelve original space flies. Rest in peace, guys. Hopefully it was better than being swatted.

(via Gizmodo, image via Ewok Jorduman)