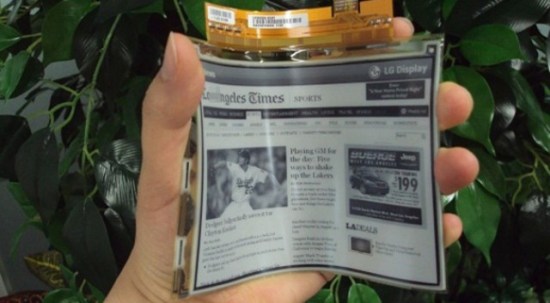 E Ink devices are about to get a lot more like paper. LG has just started mass production of the first flexible, plastic E Ink displays. The flexible E Ink displays have a resolution of 1024×768 and are 6 inches diagonal, much like the Kindle and Nook. Unlike the Kindle and Nook, these flexible displays are made primary out of plastic instead of glass laminate, allowing them to be flexible as well as 30% thinner, 50% lighter, and virtually impossible to shatter.

As if the weight and thickness improvements weren’t enough, flexible E Ink displays also promise a lower price point and improved battery time. Granted, you’d be hard-pressed to beat the battery time of traditional paper, but E Ink has some other distinct advantages, so it evens out more or less. According to an LG press release, the flexible E Ink displays can survive 1.5 meter drop test after 1.5 meter drop test, as well as considerable abuse from a small hammer, all while boasting 40 degrees of flexibility about the display’s midpoint.

The specifics to how the technology actually works aren’t exactly common knowledge, but the fact that this is actually possible — and moreover, feasible for mass production — is incredibly promising. While eReaders like the Nook and Kindle have already revolutionized the print industry, and the publishing industry by extension, the promise of cheap, flexible eReaders not unlike a magazine in form factor ensure that eReader technology is only going to become more pervasive. As much as I like to lament the death of print, the prospect of these gadgets is incredibly exciting. There’s no word on when these might start making it to shelves, or what kind of framework they’ll be attached to, but I’ll tell you one thing: When they do make it to shelves, you can bet that I’ll be there to snag one.