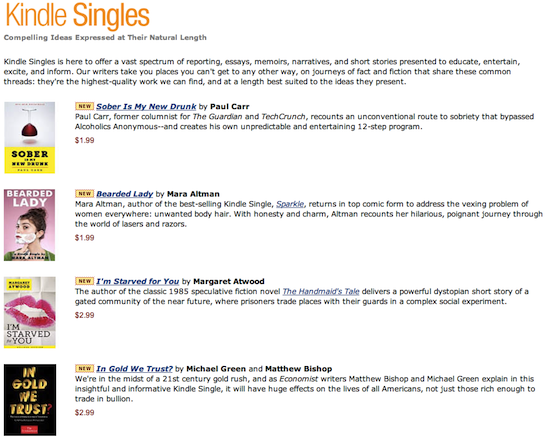 In January 2011, Amazon launched its “singles” initiative. The stated goal was to present “compelling ideas expressed at their natural length,” with shorter-form works at lower prices. In the past 14 months since the singles were announced, Amazon has managed to move over two million of these little books, netting some authors hefty profits. But is that all the world’s largest bookseller is up to?

The news comes from PaidContent, which interviewed several singles authors. Using the number of singles sold, and the average price of singles available, they estimate that Amazon’s 30% cut of the total sales was around $1.2 million. Not all that impressive given the size and scale of Amazon’s business, but consider that the other 70% went to the authors who are probably quite happy.

Unlike the Kindle Direct Publishing system, which is Amazon’s self-publishing platform, the singles program is a little more exclusive. Anyone can apply — and the company apparently receives 50 unsolicited manuscripts a week — and the entire operation is curated by Columbia University professor and Village Voice editor-in-chief David Blum. Furthermore, most singles authors are fairly well established, and have published before. For best-selling singles writers, the system has worked quite well; Mishka Shubaly has made an estimated $129,544.82, David Dobbs $55,720, and Oliver Broudy some $65,241.16.

While this is certainly good news for those authors, and good news for more and better writing, it’s mostly good news for Amazon. Though their profits off the singles is modest, it’s likely that this project is for more than just money. Given that Amazon allowed PaidContent to interview its best selling singles authors without restriction and allowed those authors to disclose sales information — something which is apparently not often done — it seems like Amazon’s singles is as much a lure for authors as it is for readers.

The message seems plain: Come to Amazon, have a work published that’s too long for magazine but too short for a normal publisher, and you’ll wind up with big fat paychecks like these guys. The fact that the store is curated and not simply a free-for-all like Kindle Direct Publishing also seems designed to give a sense of credibility to the project, as self-publishing (often called “vanity publishing”) is generally scoffed at by authors — both established and otherwise.

With the kind money being paid out to some authors it’s certainly going to get people’s attention. Publishers especially.