Flash Not Coming To Android Jelly Bean, Slowly Bleeding Out | The Mary Sue

Flash Not Coming To Android Jelly Bean, Slowly Bleeding Out in the Shadows 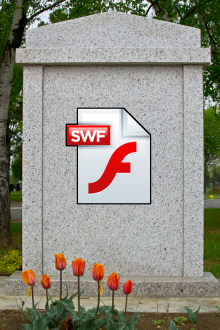 Flash, specifcally mobile Flash, was effectively sentenced to death a while back. The first inklings came when Abode put out their own non-Flash media tool “Edge,” and then was confirmed when the company dropped 750 employees and halted all development of mobile versions of Flash, ostensibly forever. It’s not until now, however, that we’re seeing Flash really start to crumble. Android, once open to the protocol, will no longer be supporting Adobe Flash with its newest version, Jelly Bean.

Previously, in Flash’s heyday, many mobile devices were what you’d call “Flash Certified,” meaning that they either came factory loaded with Flash or had it bolted on in an official system update. These were the devices on which Flash worked best. If you had a non-certified device, however, you could still download Flash from the Google Play Store and see if it worked. This is about to change.

Starting August 15th, Flash will no longer be available for download in the Google Play Store. Users who already have Flash can update it, but nobody new will be able to hop on board. Why? Well, in part because there will be no certified implementation of Flash on Android 4.1 Jelly Bean, or on anything after it for that matter. So don’t expect to play with Flash on your Nexus 7 tab. When it comes to anyone who has Android 4.0 and Flash and is looking to hop up to 4.1, Adobe recommends that you uninstall Flash beforehand as it “may exhibit unpredictable behavior, as it is not certified for use with Android 4.1.”

If that’s not a nail in the coffin, I don’t know what is. It may seem kind of odd that Adobe seems so eager to kill what was once its favorite child, but it’s become increasingly clear that Adobe Flash has no future on mobile devices, and as such, it’s in everyone’s best interest for Adobe to just take it out behind the barn, Ol’ Yeller style. There are plenty of people who think this ought to be how we handle the desktop version as well. In any case, it’s something of the end of an era. Then again, this era has been ending for so long at this point, that it hardly feels like a clear demarcation. Perhaps the most jarring thing we can expect from all this is the inevitably weird new slang that will pop up to replace the antiquated term “Flash games.”