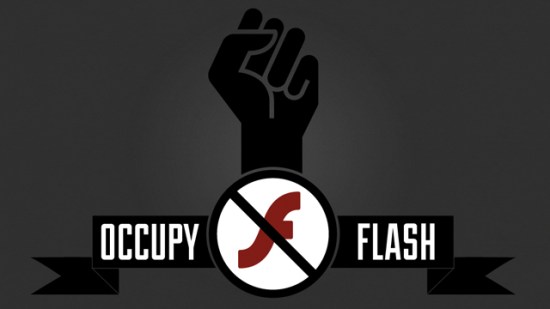 Occupy Flash, a weirdly misnamed movement presumably riding on the coattails of the much more appropriately named Occupy Wall Street movement, is encouraging users to unequivocally uninstall Adobe’s Flash player. It all comes back to the fact that Adobe has recently ended mobile Flash development in order to head in a more HTML5 direction. That being the case, Occupy Flash supporters are uninstalling Flash in hopes of forcing Adobe in a more HTML5 direction. Because it’s certainly not headed that way already. No, not at all.

Sniping aside, the movement does have its merits. While Adobe is spending some time looking into HTML5, the fact that Flash continues to exist is sort of cutting into HTML5 development in other ways. Granted, Adobe wants more HTML5 too, but for the time being, they still have this Flash horse in the race, and they are going to keep beating it until it is dead, and then probably a little bit more after that. For the rest of us, Flash has already become a dead end, and the longer we allow Flash to be useful, the more development man hours that could be sunk into up-and-coming HTML5 will be wasted on dead-in-the-water Flash.

The bottom line is that no matter what you do, Flash is still going to be lying on the floor bleeding out; Occupy Flash is just calling for a mercy kill. It makes sense except for the fact that uninstalling Flash will probably be a personal inconvenience for you. I mean, Flash games, guys. Flash games. Occupy Flash supporters argue that if everyone just drops Flash now, the multimedia content gap will be much shorter than it would be otherwise, and that, of course, is true. However, if everyone else drops Flash now but I don’t, the multimedia content gap might be imperceptible. We’re talking about Flash, not national politics, so I reserve the right to be selfish on this one.

(Occupy Flash via The Verge)