First Ever Video Of A Thought Taking Shape Captured [Video] 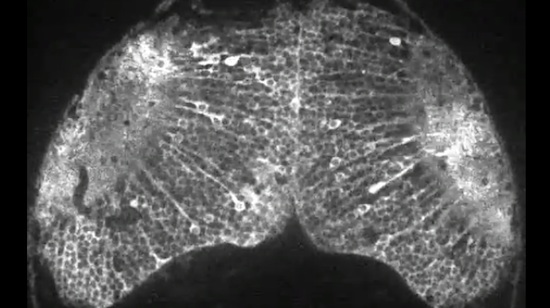 Researchers at Japan’s National Institute of Genetics believe they’ve captured a world first video — images of a thought making it’s way through the brain of a zebrafish. It’s not a particularly complicated thought — essentially ‘Hey, that looks like it could be food.’ — but the fact that the team has imaged the very stuff of even simple thought for the first time is really kind of amazing — not unlike magic. Keep reading to see the video of this unprecedented look into the mind of a zebrafish.

Researchers were able to image visual perception in the fish using a new tool designed just for the purpose — a super-sensitive fluorescent probe that detects neuron activity, causing neurons to light up when they’re activated. In this case, the images are of the activity in neurons as a zebrafish watches a paramecium flit around it, registering the movement of its prey. After this strong first showing, they’re hopeful that examples of the probe could be used to learn more about the ill-understood circuitry of the brain, and how connections between brain cells work together to produce thought or register and act on perception.

We’re all for taking things with a grain of salt — especially brain imaging matters, which can be among of the most oversold and overhyped of studies. But c’mon, we’re entitled to get excited about something once in a while, and we’re choosing to be excited about this. While zebrafish don’t have a reputation as deep thinkers, they represent just the first step here. Watching thoughts form and objects be perceived in the brain in real-time has the potential to really drive forward our understanding of the biggest mystery in biology.