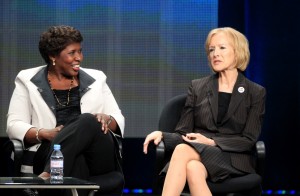 Back in 2011 Jim Lehrer, the longtime host of PBS’ NewsHour, retired, leaving his post to be filled by a series of guest anchors. But now PBS has chosen Gwen Ifill and Judy Woodruff as his replacements, making NewsHour the first network news show to be co-anchored by ladies. Kind of. Quoth Woodruff:

“We’re not the first. Amy Poehler and Tina Fey were the first female co-anchors.”

Continued Ifill: “Here, right now, it’s news. We would like for the day to come when it’s not news anymore…but [viewers] don’t see it every day right now.”

Behind the jump, Jezebel brings us some other great quotes from the superhero news reporting duo:

Ifill: “I am so pleased to be taking on this new role alongside my colleague and dear friend Judy Woodruff. We’ve successfully worked side-by-side for many years covering conventions, elections and countless other news events. We make a great team.”

Woodruff: “Gwen and I love working together and appreciate the trust viewers put in the PBS NewsHour, both on TV and online. Working with Linda and this entire terrific team, we’ll do our best to make sure the next chapter for the NewsHour upholds its reputation for excellence, independence and integrity.”

And from Ifill, who is African-American:

“When I was a little girl watching programs like this — because that’s the kind of nerdy family we were — I would look up and not see anyone who looked like me in any way. No women. No people of color,” she said.

She continued, “I’m very keen about the fact that a little girl now, watching the news, when they see me and Judy sitting side by side, it will occur to them that that’s perfectly normal. That it won’t seem like any big breakthrough at all.”

You go, Gwen and Judy. And the same goes to PBS. You’ve made me smile yet again.