Is This the First Picture of IRL Tatooine? 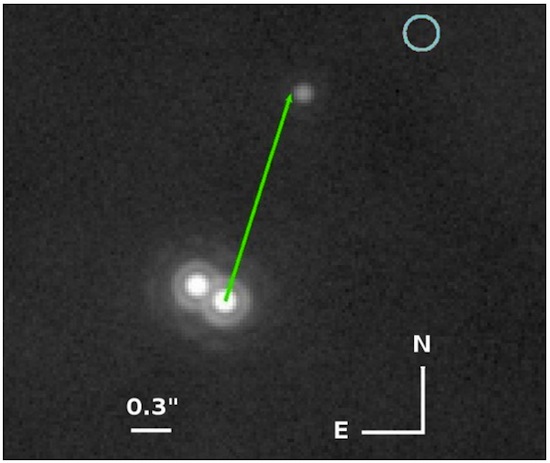 A team of astronomers in France believe they have captured the first direct image of a distant planet that orbits a pair of binary stars. It’s probably not a lot like Luke’s home planet of Tatooine, though, as the enormous object is a gaseous body more than 10 times the size of Jupiter, and leaving the scientists who captured the image still trying to figure out whether it’s a huge planet or a tiny star.

The research team at Joseph Fourier University know that they’ve captured an image of something orbiting the binary stars of system 2M0103, thanks to the telescopes at the European Southern Observatory in Chile. Just what that something is, though, is going to require some more sorting out. Thanks to archival data from the telescope, they can be sure that the object is orbiting the two stars. And at a distance of 12.5 billion kilometers away from the stars, it seems likely that whatever it is formed from the accretion disc of rubble and dust surrounding the binary system.

Its massive size, though, makes it hard to categorize the mystery object. At somewhere between twelve and fourteen times as large as Jupiter, the object resides in that tricky gray area between huge planets and tiny brown dwarf stars — dim, slow burning stars that formed, but remained too low in mass to ignite properly.

To try and sort things out, the teams next goal will be to examine the chemical makeup of the object, known as 2MASS0103(AB)b. That should give them a better idea of its history and how it was formed, and provide an answer to whether its a planet or a star. It could even help other teams to clear up that gray area between large planets and small stars, providing a small step towards better understanding both.