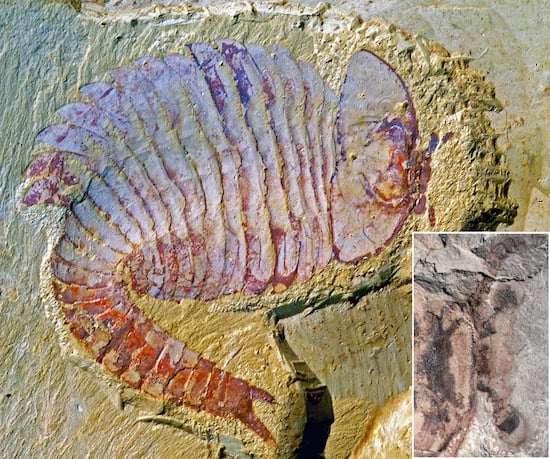 The fossilized example of Fuxianhuia protensa above might be smarter than it looks. The darker inset area is the creature’s fossilized brain, and it may be the earliest example on record of a modern brain structure. If that’s the case, this 520 million year-old fossil could demonstrate that complex brains developed much earlier than once thought, settling years of debate among paleontologists and providing a long-sought missing link in evolutionary development among insects and crustaceans.

Many scientists believed that insect brains evolved from branchiopods, a variety of arthropods that includes brine shrimp and, because they have a very simple brain structure, are generally noted for their contributions to the world of poetry and science, but what good whale food they make. The similarities between F. protensa and modern crustaceans, though, suggest that complex brains evolved more quickly than anyone thought, while branchiopods brains evolved into simpler forms from more complex ones. Which is pretty understandable, because if all you’re going to do with your day is float around until something larger swallows you, do you really want to be thinking about it all that hard?

The brain of F. protensa isn’t modern in the sense of being particularly advanced — it couldn’t recognize a face or turn on a television of any of the other important things we do without big brains. But for a half-a-billion old sea dweller, it’s a pretty impressive collection of neural cells.The brain is segmented into three sets of neuropils, which are parts of the brain that govern a particular sense and are stimulated by input from it.

What’s most striking is how little the basic circuitry of the brain found in this fossil has changed in related creatures today. Once they found a brain that worked, malacostracans — the evolutionary branch that includes this fossil, as well as modern creatures like crabs — didn’t bother to change it much. While they evolved much different bodies and new, more refined sensory inputs, those inputs are all plugged into a brain that existed 520 million years ago, and still seems to get the job done — at least when the job consists mostly of eating, sleeping, and clipping things with big armored claws. Say what you will for the career satisfaction, but the gig hasn’t changed much since the primordial soup.