Could the First Amendment Prevent Trump From Blocking You on Twitter? 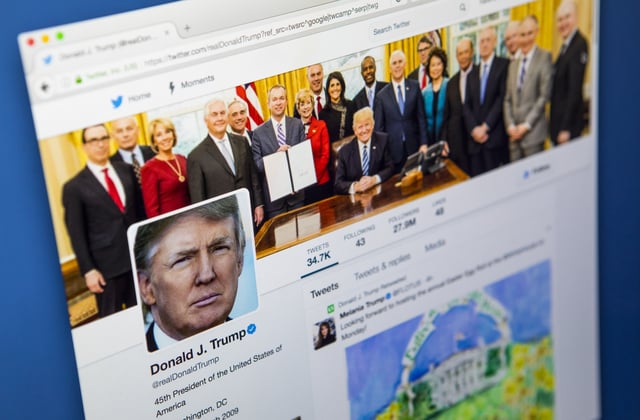 Donald Trump’s personal Twitter account – @realdonaldtrump – has been a stream of raving garbage throughout his lifetime, and in particular during his administration. But it may also qualify as a protected First Amendment forum, meaning that Trump would not be legally allowed to block the many, many “haters” he has currently banned from seeing his tweets. In fact, the Knight First Amendment Institute sued Trump for just that reason, alleging that he violated the constitutional rights of these seven U.S. citizens by blocking them on Twitter.

Now, a federal ruling in a separate social media case seems to confirm these citizens’ interpretation of the constitution. Constituent Brian Davison brought a suit against Phyllis Randall, the chairwoman of the Loudoun County Board of Supervisors in Virginia, after she blocked him on Facebook for leaving a negative comment about corruption on one of her posts. Randall had previously posted on her page, “I really want to hear from ANY Loudoun citizen on ANY issues, request, criticism, compliment, or just your thoughts.” But when Davison had something critical to say, she blocked him for about 12 hours.

As a result, U.S. District Judge James Cacheris concluded that she had engaged in “viewpoint discrimination” in blocking Davison. Since her Facebook page “operates as a forum for speech under the First Amendment to the US Constitution,” she could not block Davison for merely criticizing her. “The suppression of critical commentary regarding elected officials is the quintessential form of viewpoint discrimination against which the First Amendment guards,” Cacheris wrote in his ruling.

However, officials can block their constituents for reasons other than “viewpoint discrimination.” Davison previously tried to sue a prosecutor for deleting his comments from the prosecutor’s official Facebook page, but Judge Caheris dismissed the suit because Davison’s comments were “clearly off-topic.” So if you’re just tweeting poop emojis at Trump, he might be allowed to block you.

Officials are also given more leeway when it comes to censoring and controlling their personal accounts, rather than their official, public ones. As Slate points out, this could likely be Trump’s defense in his own lawsuit. He does not block people from the @POTUS account he inherited from Barack Obama – only on his personal @realdonaldtrump account.

However, since Trump loves to use his personal account to “counteract” negative media coverage and promote his “accomplishments,” it is also pretty clearly a public forum. After all, the @realdonaldtrump account is where his own Cabinet first read about his ban on transgender people in the military. It’s where he announced the firing/quitting/conscious uncoupling of Chief of Staff Reince Priebus. The suggestion that this is merely his personal, private account is rather obviously untrue.

Also, he literally said he uses it as part of his presidency. (Really, truly, a tweet for every occasion.)

My use of social media is not Presidential – it’s MODERN DAY PRESIDENTIAL. Make America Great Again!

We’ll have to wait for the lawsuit against Trump to reach its day in court, but the Virginia ruling may be a good indicator of the rulings to come.

(Via Ars Technica and Slate; image via Shutterstock)