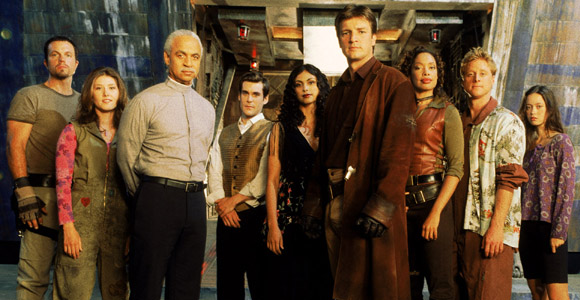 Do you recall the story of University of Wisconsin-Stout professor of theater and speech, James Miller, getting in trouble for hanging a Firefly poster on his office door? It included a quote from Nathan Fillion’s character Mal Reynolds which contained the word “kill” and the school’s police chief Lisa A. Walter decided it was a public safety threat. Instead of my idea to send Walter Firefly on DVD so she could fall in love with it and let Miller put the poster back up, the issue was taken to the free-speech organization FIRE, the Foundation for Individual Rights in Education. Now, enthusiastic Firefly fans and none other than Neil Gaiman have joined the cause in a new video produced by FIRE. Give it a watch.

“I think what’s disappointing, is that the university administration backed their police officer rather than quietly taking her aside and pointing out that she had done something that was stupid, wrong and that would embarrass all of them,” says Gaiman in the video. ” I think free speech on campus has to be important because the currency of a university is ideas.”

After all this media attention, the campus finally backed down. Firefly may have lost the television battle but it will always win the war.