Late to the Party Recap: Firefly Episode 12 “The Message”

There has to a porny fan fiction about this episode called "The Massage" right?

Last week’s recap had to be relegated to a series of tweets due to time constraints. You can check them out with the hashtag #fireflew, or just watch the flashback at the beginning of this week’s episode. Today, I’ve got all kinds of time, so let’s get into it with the episode “The Message.”

The crew of Serenity is on some kind of weird space Times Square? 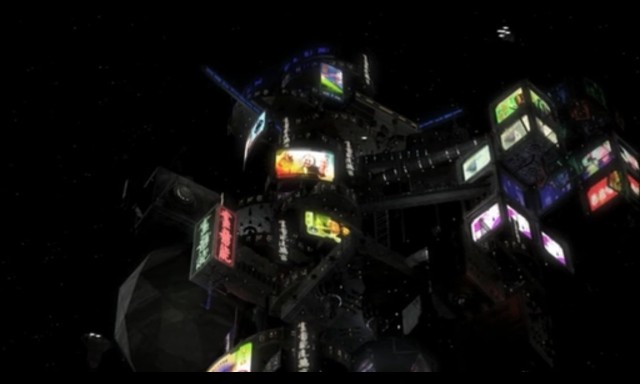 Some carnival barker is shouting about alien life, and it’s apparently caught the attention of Kaylee and Simon. The “alien” in question, according to Simon, is a mutated cow fetus.

This is now the second episode in a row where we see “Casual Simon” who seems to have traded in his endless vest collection for a more relaxed sweater. I think I liked Vest Simon better, but I don’t really like Simon much at all either way.

Wait, is this a DATE!? Are Kaylee and Simon on a DATE!? It is, and HE. BLOWS. IT! Looks like Simon didn’t read The Geek’s Guide to Dating because we’re pretty sure if he had he wouldn’t have explained to Kaylee that’s she’s his only option. 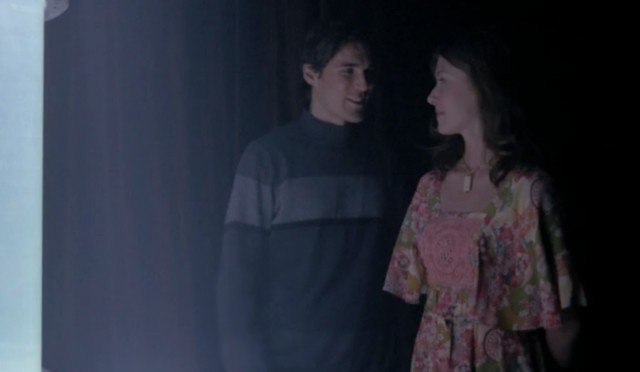 This sweater’s not working out, is it? 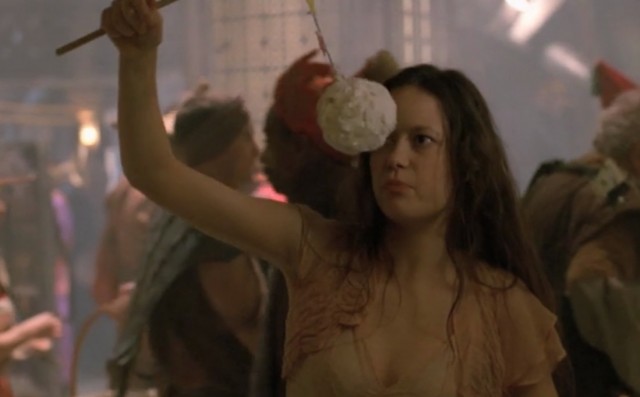 Jayne calls it an “ice planet” but that doesn’t help explain what it is.

Everyone’s got some mail. Even Jayne who got a care package from his mommy, and he’s reading his letter out loud and that’s adorable. He has a new hat! 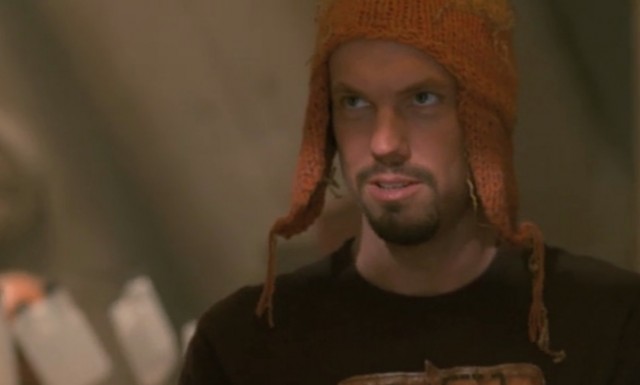 How come people don’t cosplay as hatted Jayne from this episode at every con ever?

The package that came for Mal and Zoe seems pretty big. Almost looks like it’s big enough to fit a person, but it’s not like someone would try to ship a person in a box — except for Simon. Let’s get the crowbar and see what’s inside and yup. It’s a person. 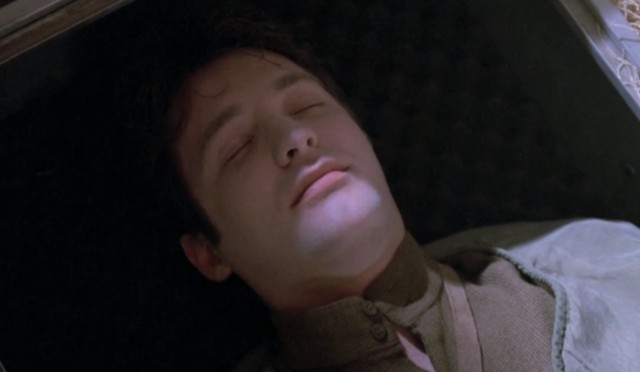 What is with this show and people in boxes? Does Joss Whedon have “a thing” for boxes?

There’s a flashback to the war. It shows what looks like the dead guy in the box trying to eat beans. He’s about to get killed, but Zoe intervenes. She’s preaching stealth and how it can help keep you alive. Then Mal runs in screaming, guns blazing, because Mal is about as good a soldier as he is a captain. If you’ve been reading these recaps, you’ll remember that he’s terrible at being a captain.

It seems like the future dead guy is named Tracey, because that’s what Mal is calling him. Some kind of tank rolls in shooting and interrupts their little get together. Back in the present the crew brings the dead guy on board, and finds that he’s holding a small recording device with “The Message” on it. It sounds like a will, and he’s making requests about what to do with his body.

Wash sets the Serenity to its new destination, where Tracey asked to be sent. Meanwhile, some tough-nosed cops are harassing the mailman Mal and Zoe got the dead guy from. He quickly rolls over on them, and the cops threaten to set him on fire anyway.

Kaylee is listening to the message in her bunk. Simon tries to go talk to her, but wimps out. Maybe he’s just going to get a vest? He seemed to have better luck in a vest.

Jayne is exercising while Book is standing over the dead body brooding. Looks like it’s time for the weekly River creep-out, as she climbs up on the coffin and tells Book it’s “very comfortable.” 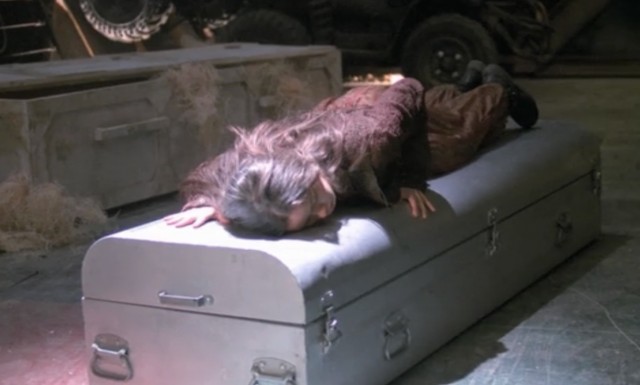 We get it. River’s weird.

Mal and Zoe are telling war stories about Tracey to Inara in the kitchen when Serenity is fired upon by that fire-happy cop who interrogated the mailman. They want Tracey’s body, so Mal decides to have Simon do an autopsy to find out why. Turns out, the dead body isn’t so dead. 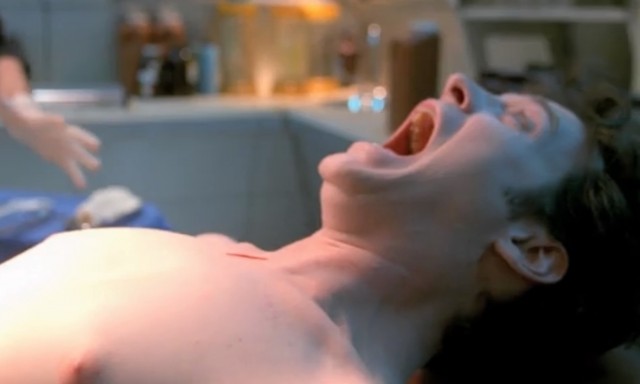 He barely knicked you. Relax.

Tracey’s heart is somehow beating like crazy, and so are “all the moving parts.” His insides have all been replaced by lab-grown human organs. He’s being used as a means of transporting the organs, but tried to sell them to the highest bidder. He faked his death Romeo-style to hopefully elude them, but since cops are trying to get his body and threatening to set people on fire, it doesn’t seem to have worked.

Wash is leading the cops on a chase on some icy planet, while Tracey and Kaylee have a nice moment in her bunk. Simon who? Book notices something strange about the “cops” chasing them. They’re near an Alliance base, but haven’t made contact. It strikes him as odd, and since he thinks it’s odd, the viewer should too because that’s how television works.

Serenity hides out, but the bad guys start bombing the area. Book talks Mal into into letting the fake cops board them so they don’t all die, but Tracey pulls a gun to shut the whole thing down. And in case you were wondering, Jayne still has his hat on. 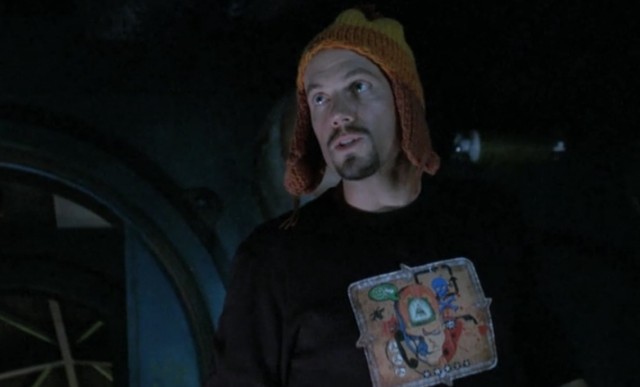 Mal orders Wash to call the cops. He tries to, so Tracey shoots Wash. Zoe shoots Tracey, and Tracey takes Kaylee hostage and suddenly Simon doesn’t seem so bad. Turns out Tracey is kind of a tool, so I’m not really that sad to see Mal and crew turn him over.

The cops board Serenity. The crew already has guns on them when they walk on, but Book faces them unarmed, and calls them out on running an illegal operation outside of their jurisdiction. Book’s kind of a badass. The bad guys turn to leave, but not before the leader tells Jayne his hat makes him look like an idiot. Don’t listen to him, Jayne. It’s adorable.

Mal and Simon are tending to Tracey, who doesn’t seem to be doing very well considering the gunshot wounds and all. After some speeches, he dies for real this time, and Mal and Zoe bring him back to his family.