Update: There Is [Not] Going to Be A Firefly Spin-Off Movie in 2012, But No One From Firefly is Involved

Update: Turns out there’s simply going to be a movie with no one from Firefly involved. The Firefly connection came out of a comparison (the film is just meant to be Firefly-esque) and then a bit of blogger telephone. Happens to the best of us, but we do apologize. You may return to your bunks.

We would never, ever want to toy with your emotions with a headline like that because it is accurate. However, that’s the good news. And when there’s good news, there is often bad news. It’s not terrible, but it does involve the cast of Firefly and their lack of involvement in this movie. That is, none of the original cast are involved in this movie. But Firefly‘s universe did not end with the show, and a low-budget movie is set to continue the story some time next year. Thank you? All aboard, Browncoats (if you’re still interested)!

Writer/director Rick McLeod did an interview with The Westmoreland Gazette (where the movie will be filmed), which provided an unofficial synopsis:

The film, called Lost Transmission, follows the lonely adventure of Blake, captain of a mining ship, with no-one but his computer to talk to after war breaks out on Earth. But he leaves the planet to find life on other worlds.

Right now, they are looking for “23rd century pirate” types to play extras in this movie, which was given a budget of $1 million. And judging by the looks of its poster, it looks like … a $1 million fan film. 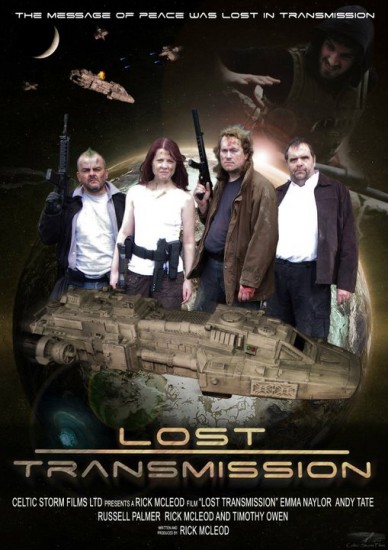 And that’s fun! There’s tons of Firefly fan fiction, so why not make a fan film? But in case you’re browsing the interwebs one day and read something about a new Firefly movie, be aware that it’s probably this one. Apologies if you’ve reached the end of this post disappointed, but if you are still interested in seeing a very, very independent special effects movie that takes place during the same time as Joss Whedon‘s beloved series — but might only have a tiny bit to do with said series — sit tight until 2012. Filming is set to start in the UK and America soon.