Apparently, Someone Is Seriously Working On Getting A Firefly Animated Series Made 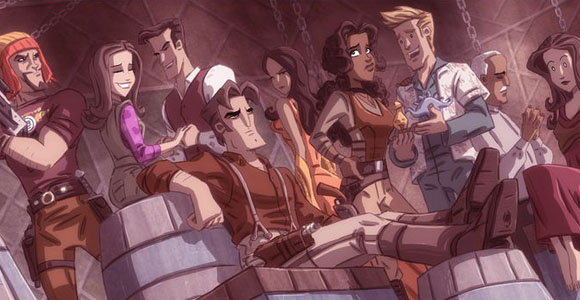 Guys, some days I think the cast of Firefly are just big, mean trolls. See what you make of this…

The AV Club reported on something that was mentioned during the Firefly panel at New York Comic Con, then followed it up with some more information from an interview with the New York Post. Here’s what they had to say:

This weekend saw New York’s own Comic-Con, and as it wouldn’t be a Comic-Con without someone showing up to stoke anticipation of an unlikely Firefly revival, the cast reunited to do just that. “If we’re dreaming, tell me what you think about this: Firefly: The Animated Series,” Nathan Fillion said before a room packed with Firefly fans, no doubt feeding on the resultant gasps and applause and tears to grow several inches taller, as his cells absorbed the energy of all that frustrated yearning. After the panel, co-star Sean Maher took it one step further by telling the New York Post that he knows “somebody who is actually trying to get that done, who has approached Joss [Whedon] about it,” adding that this person “used to work with Guillermo del Toro” and also lives in Canada, you wouldn’t know him. Anyway, while—like all Firefly revivals—this exists purely in hypothetical, fan-baiting terms, Fillion added he believes “there’s less face to be lost in an animated series,” as opposed to doing that long-rumored sequel to Serenity, which ate so, so many faces.

Don’t worry though, if this doesn’t happen you still have the hour-long Firefly reunion special to look forward to, November 11th on the Science Channel.