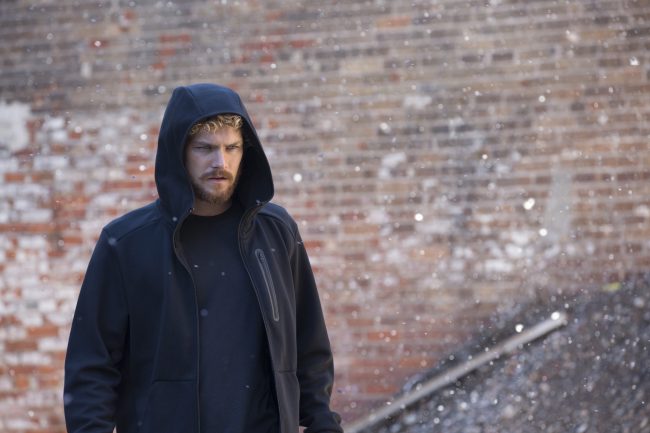 Actor Finn Jones left Twitter momentarily after a conversation about diversity and representation on the upcoming Netflix series Iron Fist. The series, set to arrive on the streaming service March 17th, stars Jones as protagonist Danny Rand. While the character has been canonically white, fans had campaigned for an Asian American actor to take on the role to avoid some of the character’s white savior syndrome. The casting of Jones, as a result, was a disappointment for many.

So, when Jones tweeted a link to Riz Ahmed’s powerful speech about representation on March 5th, some, including Geeks of Color director Asyiqin Haron, were skeptical. Haron, who took the words right out of our mouths, responded by tweeting “…..Are you for real”.

Jones responded with a series of tweets, writing:

@AsyiqinHaron yes, I am for real. please don’t make assumptions on our show before you have seen it. the characterization of..

@AsyiqinHaron Danny Rand may have remained true to its source material but our show incorporates and celebrates actors from..

@AsyiqinHaron all different backgrounds. I will go as far to say that it may be one of the most diverse shows out of the three.

@AsyiqinHaron there are a lot of characteristics in Danny which are problematic, that’s the point, rather than shy away from them we..

@AsyiqinHaron inspect them. It makes for a rich, intelligent, thought provoking show.

@AsyiqinHaron progressive story whilst keeping true to the comic book fan base..

While Jones isn’t wrong that Iron Fist has a diverse cast that includes the amazing Jessica Henwick as Colleen Wing and Lewis Tan as Zhou Cheng, Haron pointed out that it was the casting of his character that fans took an issue with–something he doesn’t acknowledge by pointing to other casting decisions. While the show might “one of the most diverse shows out of the three,” it’s still a kung-fu story centered on a white man. You don’t get to claim an early victory over the unapologetically black Luke Cage there.

Jones continued to explain to Haron (who is from Singapore) that his casting is “a more progressive way forward” than changing the character’s race. He then temporarily deleted his account, and Haron, whose tweets are now protected, was harassed. In a quote to theblerdgurl, Haron said she “tried to be super civil” and “there was no hostility at all.”

When Jones returned, he tweeted this:

helpful article on how to reconnect with your own chi.. that’s right, no special abilities needed – just breathe 😉 https://t.co/nsHHzjLcgk

The actor states he left to re-focus himself and while it’s understandable that Twitter can be overwhelming, it’s clear that he doesn’t recognize the huge glaring problem of trying to explain representation to an Asian woman. I have an extremely hard time mustering up sympathy when he’s claiming that the voices of minorities is distracting him from his important and progressive work.

He gave this full statement to Deadline:

There is a huge benefit to engage and help shape conversations on social media, especially when it comes to giving a voice to social matters. My original intention was to amplify a speech made by Riz Ahmed at the House of Commons. It was a very articulate and important speech on representation that I wholly agreed with. After posting I was inundated by people accusing me of not being allowed to share his voice based on an assumption that our show is going to play into the problems of racial inequality on screen.  I engaged politely, diplomatically and attempted to bridge the divide. I’m currently in the middle of filming and I need to stay focused on bringing to life this character without judgment, so I decided to remove myself from twitter for the time being.

I am very proud of the work everyone has done on this series and I’m excited for people to see how we’ve adapted the story. We have gone to great lengths to represent a diverse cast with an intelligent, socially progressive storyline. I hope people can watch the show before making judgments. In times, as divisive as these, we need to stay unified, compassionate and understanding in our differences.

Again, while I support the work of the many actors of color on Iron Fist, Jone’s statement about being “divisive” is the language white people constantly use in progressive spaces when shutting down other groups. When addressing these very valid concerns about a character with problematic elements, it’s not a good look to sidestep and write it off an uninformed judgement.

So often, women of color are told they’re being divisive when they criticize something like Ghost in the Shell or Doctor Strange because, “Wow! A strong female role!” LGBTQ+ individuals are shut down they push against cis-specific language or erasure because, “You’re alienating allies!” Iron Fist could very well do what Jones says it will and the end result will surprise us, but it’s not “divisive” to be critical and angry that this role wasn’t given to an Asian American actor who’s more qualified. (I’m not even saying Iron Fist is going to bad, I’m just saying I believe it could have been better.) It’s just one example of many where people of color are pushed to the sidelines of their own stories.

We should stay unified, compassionate and understanding–which means listening to people with less power and reach than you when they speak. That’s not what happened here.