I wonder, though... what if she got to play Iron Fist? 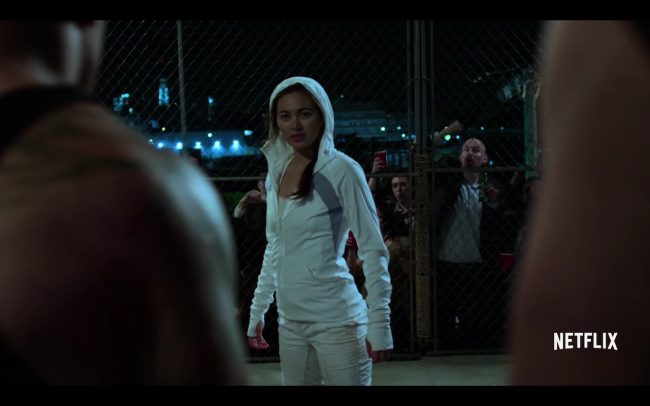 So while we here at TMS might sympathize a little more with Claire Temple’s reaction to Iron Fist (“What the hell is that supposed to mean?”), we’re actually pretty stoked to see Jessica Henwick take on the role of Colleen Wing. Now, thanks to this super neat clip of her taking on two muscle-bound fighters in a cage match, we get to see what’s waiting for us in this premiere season of Iron Fist.

I mean personally, for starters, she played Jess “Pava” Testor in Star Wars: The Force Awakens, a character who drove me to tears just seeing her on screen, so I’m super glad to see her flex a bit more of her acting muscle here as Colleen. She’s supposed to be starring alongside Finn Jones as Danny Rand (and according to IMDb, they do star in the same amount of episodes), and honestly, after this clip of her in action, I’m left to wonder just what it would be like if Marvel ended up making her Iron Fist instead of Jones. Sigh.

Anyway, something that stuck out to me watching this clip was Colleen’s fight style. It started off a bit showy and theatrical, but partway through, she was knocked off of her groove just a little bit. That was enough, though, to set her off balance, and she definitely seems like she struggles for the rest of the fight. She wins (or perhaps it’s more accurate to say she’s winning) as the clip ends, but its obvious that wasn’t as clean as she had hoped it would be.

It’s not like Henwick is a stranger to fight scenes either; she plays Nymeria Sand on Game of Thrones (a.k.a. one of the “Sand Snakes” assassins/fighters). I’m hoping that this “rough-around-the-edges” deal is mostly set at the beginning of the series, as I’d really love to see her kick some ass and grow into the full badass I’m expecting her to be. There’s potential here, is what I’m saying.

But like I said: it’s hard not to imagine what it’d be like if Marvel decided to totally flip the Iron Fist casting completely and had her play Danny (Dani? Danielle?) Rand. It’s the only thing I know I’ll be thinking about as I watch the show. Another sigh.