Final Fantasy XV got its own dedicated live event last night (which you can watch in full above if you’ve got several hours to spare), and Square Enix unleashed a flood of information including a release date, special editions, companion anime, a demo, and more. If you didn’t manage to watch the whole thing yourself, we’ll help you catch up on the main points you might have missed.

First, the demo: This new Platinum Demo is available now for Xbox One and PS4 owners (just as the eventual game will be) by heading to your console’s online shop. It’s not actually a part of the main game to try in miniature like most game demos; instead, the Platinum Demo takes you inside the mind of the game’s main character, Noctis, to provide a spoiler-free story where you can get a feel for Final Fantasy XV‘s combat experience. The Demo trailer describes it: “PLATINUM DEMO — FINAL FANTASY XV whisks players away to a fragmented dreamscape, introducing an original story with a number of unique twists. Join young Noctis and his magical guide, Carbuncle as you explore the fantastical world of his dreams.”

Noctis is also the only character players will directly control in FFXV itself, with his road trip buddies functioning as AI companions. The full game will finally see release on September 30 of this year, and it got a brand new trailer (or two) featuring Florence and the Machine:

To fill in the story of just why Noctis and his pals are so close, there’s a five-part animated series called Brotherhood: Final Fantasy XV from A-1 Pictures. Episode one is already available for free on YouTube, where you’ll also be able to watch the rest as they lead up to the game’s launch. There will also be a feature-length, 3-D animated movie, Kingsglaive: Final Fantasy XV (trailer), which takes place during the events of Final Fantasy XV and shows what’s happening with Noctis’s father and the kingdom he left behind on his journey.

The movie will release digitally at some point before the game’s launch, and its description reads,”Directed by Takeshi Nozue, the film brings to life the adventure of hero Nyx Ulric, a member of Lucis’s elite task force: the Kingsglaive. As Nyx and his fellow glaives stand before the crown city of Insomnia, fighting to stay the advance of Niflheim’s overwhelming military might, he is pulled into a struggle for the very survival of the entire world.

Told through the eyes of King Regis, KINGSGLAIVE depicts an epic saga in the world of FINAL FANTASY XV , sharing its unique mythos and memorable characters as it weaves together the complexities of a kingdom at war, political intrigue, and enthralling battles. This immersive cross-media collaboration will set the stage for FINAL FANTASY XV and the journey of Regis’s son, Prince Noctis.”

There will also be a mobile mini-game called Justice Monsters Five to tie in with the in-game pinball machines, and there will be two special editions for fans to choose from on release. The Deluxe Edition features the game as well as the Kingsglaive movie, while the Ultimate Collector’s Edition sports bonus content, item packs, a Noctis figure, and more: 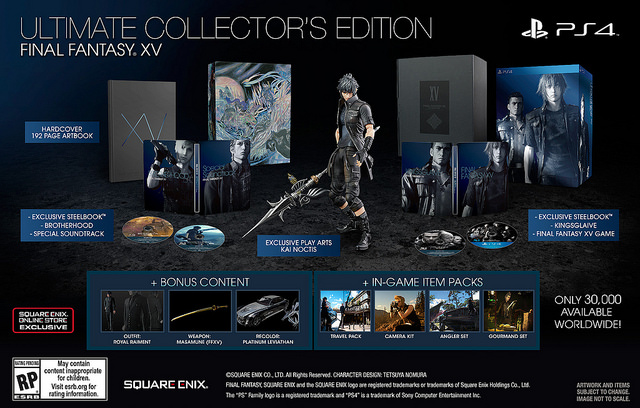