Dancing Mad: How a Video Game Character Came to be the Standard by Which I Measure All Villains 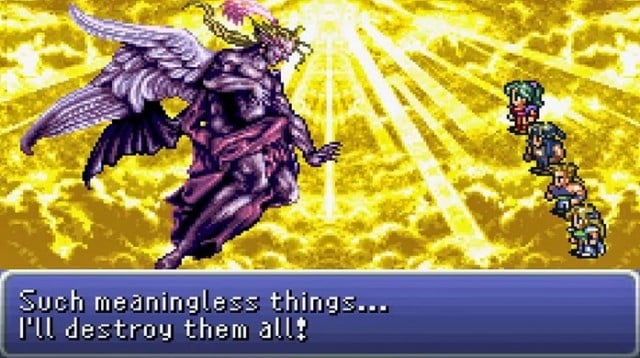 The following piece originally appeared on The Analytical Couch Potato and has been republished with permission.

When I was in high school, my younger brother showed me a video game he had just gotten into. It was called Final Fantasy 6 (or 3, depending on whether you go by the Japanese or American release number). We were both raised on video games, from Blasto! on the Texas Instruments PC to Mario, Tetris, Zelda, etc. on the original Nintendo. We got a Super Nintendo when it came out, and it was on the Super Nintendo that I fell in love with the Final Fantasy series.

There were so many things to like about it, from interesting characters to fabulous soundtracks and interactive storylines… but the thing that did it for me, the reason I stayed and watched as my brother played FF VI, was the villain. As I watched the plot of the game unfold, I found myself looking forward to the sound of Kefka’s laugh and the corresponding “Bwa-ha-ha” that appeared on the screen. Little did I know that I was witnessing the beginning of a swift upgrade from peon to god; his actions escalate from mischievous and annoying to nihilistic and unstable, and this transition is reflected through his actions and his theme song.

At the beginning of the game, you are led to believe that Emperor Gestahl is the big bad. What happens is practically Whedon-worthy as far as twisty, out-of-the-blue left field plotting that you should have seen coming but never did is concerned. General Kefka, who has been an unstable, ever-present peon of the Emperor with an annoying laugh, poisons the village of Doma, kills General Leo (one of his own co-workers), and then turns around and kills the Emperor! What the Esper is going on around here, anyway? Did Leo, whom we were so sure was going to end up joining our party, just get leaf-on-the-winded Joss Whedon-style? Yes, yes he did. The Emperor really should have known better—crushing up Espers and infusing their power into Magitek armor really can’t be good for a human, and as the first Magitek knight, Kefka was pretty much treated as a lab rat.

Next, the world is thrown into apocalypse mode, hardcore. Your band is dissolved as the world gets pummeled like it’s Loki and Kefka is the Hulk. When your party awakens, it is not later that day or week—it’s a year later! That’s right. Kefka knocked you into next year. In the time you have been out of it, you would expect a villain who has killed his master to take over the master’s duties, to rule and conquer. Wrong again. Kefka built himself a tower out of rubble, and he’s up there, sitting on it. He made a trash pile and claimed it by way of his own ass. Mine! Kefka was now so powerful that he was driven to madness and could no longer find pleasure even in dominion. The only true solution left to him in his Magitek-addled psyche was utter annihilation. There is a sort of sadness to Kefka at this point. As a player, when you come across the man who broke the world, you have certain expectations: that he will have crowned himself ruler, created enormous statues of himself, or any number of villainous clichés. Instead, he is a lonely, misshapen god so disillusioned with existence that his immortality is a burden. I kind of wanted better for him.

Throughout the game, as Kefka’s character evolves, so does the instrumentation of his theme song. When Kefka is first introduced as a character, his theme music is played to comic effect. His theme song is given an almost carnival-esque feel as his mad-clown laugh rings out. It is interesting music, but it is played in a way that suggests that Kefka is just crazy and isn’t the real villain. As Kefka’s villain cred skyrockets, his music reflects this change in status. His theme never loses the tinge of madness—that is part of what makes Kefka unique—but it does take itself progressively more seriously as the game progresses. The Emperor Gestahl has his own suitably ominous theme, very reminiscent of Emperor Palpatine’s chorus of droning male voices in Star Wars. Like Palpatine, Gestahl is overthrown (literally, off of the edge of a Floating Continent) by his former apprentice, a man whose corruption he has personally overseen over a period of years via mystical forces. Both Vader and Kefka were changed both physically and mentally by the use of “magic”—Gestahl used Esper magic, while Palpatine used the Dark Side of the Force.

Near the end of the game, your party goes to defeat Kefka atop his mountain of rubble. The song “Dancing Mad,” another more ominous variation of Kefka’s theme song with synthesized choral chants, plays during this part of the game—and it is this piece that reflects the true state of Kefka’s character and psyche. He does not have any desire to be an emperor, to take over the job of the man he kicked off of the edge of the Floating Continent. As the title of the song implies, by this point in the game he has slipped from his goal to take over, feeling a sense of pointlessness: “Why do people insist on creating things that will inevitably be destroyed? Why do people cling to life, knowing that they must someday die? Knowing that none of it will have meant anything once they do?” Instead, he plans to destroy everything, up to and including the essence of life itself. He has looked upon the nature of the world, found it lacking, and wants it gone. Completely. And he’s going to do it himself, without the aid of minions. Minions just screw everything up. Kefka would know. He used to be one.

Kefka rejects the other characters’ protests that even in the ruined world there are still things worth caring about. Oddly, this was one of the selling points of this villain for me, even when I was a teenager. Maybe it was the music or the length of time we had to get to know Kefka and follow the stages of his rise to godhood. I started to understand him. I understood why, given all of the things that had happened to him during his life, he would come to the conclusions he did. And I understood why, given the level of power he had achieved, he would choose to end it all.

This is a villain who has the madness of The Joker, the intelligence of Moriarty, the commitment to annihilation of Sauron (including giving up his original form), and the petty anger issues of Lord Voldemort. Kefka won. He ended the world. And then he had a year to sit on a pile of his “winnings” and think. “Dancing Mad” combines Kefka’s original theme in a much more orchestral form, with pipe organ music that sounds like evil church. It starts manic then plummets into dirge territory, just like Kefka himself. Just as John Williams used “The Imperial March” in various ways to make his point about Darth Vader’s fragmented soul in the Star Wars movies, Nobuo Uematsu uses “Dancing Mad” to embody the complex nature of Kefka, whose power was throttled only by his own madness.