Find Movies Filmed Near You With Google Maps 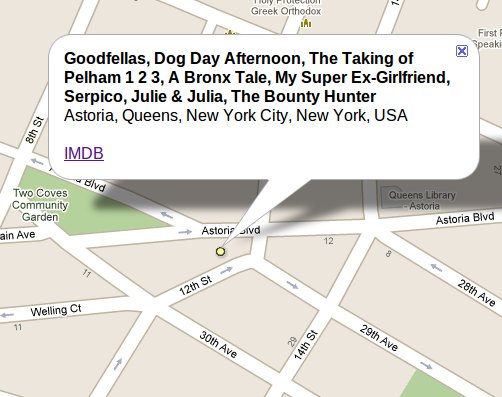 Film and data buff Edmund Helmer has found away for you, dear reader, to quickly and easily raise your social standing through bragging. He has produced a custom Google map showing where scenes for the top 2000 from the last 100 years of movies on IMDB were filmed. Now you can quickly and easily discover what films were made near you, and gloat obnoxiously about it to your friends. I’ve already started.

As impressive as the map is, the footnote to its creation is rather surprising. On his blog, Helmer wrote about the creation of the map, which he said was shockingly easy, though not without quirks:

[…] I used Google’s new data management tool: Fusion Tables. I was completely amazed by their functionality; all I needed to do was enter in the location data from IMDB, and the map was generated automatically. […] Some locations couldn’t be found by Google Maps – and in what has to be the most entertaining error handling I’ve seen, those data points are mapped to the Bermuda Triangle.

Let’s all take a moment to bask in the fact that this massive collection of data — nearly 10,000 locations — was fed into GoogleMaps’ API and mapped automatically. Truly, we live in an age of wonders.

Being new to the area, I immediately zoomed in on my neighborhood. Turns out that some of the most badass movies of all time were filmed within blocks of my apartment: Goodfellas, Dog Day Afternoon, Serpico, Julie & Julia. Actually, I might leave that last one out when I brag about this.

(BoxOfficeQuant via Bits and Pieces)