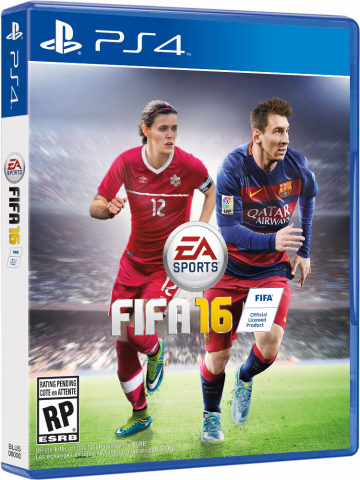 We were thrilled yesterday when we were able to tell you about the awesome covers for the upcoming FIFA 16 games, upon which we would see female players for the first time ever. However, not everyone was happy about it – which would be fine if they could get by without running to the Internet fueled by Haterade. Alas.

This has been going on since the announcement that women would be playable in FIFA 16, and when we looked for reactions to the new covers on Twitter, we noticed that the second most popular search in relation to the game was “#fifa16 women jokes:” 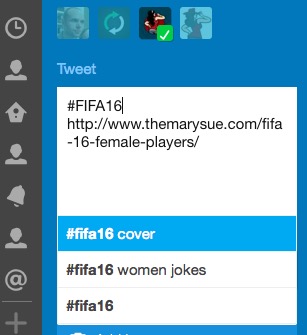 It takes a lot of women jokes to make that search autofill; such gems as:

FIFA 16 Career Mode: Your star striker has been ruled out for 9 months due to pregnancy.

Which would be offensive if they weren’t so silly. Period jokes? Come on. If women actually became incompetent every time they had their periods, NOTHING IN THIS WORLD WOULD GET DONE. And yes, women sometimes get pregnant. Does that mean that a female professional soccer player is definitely going to? And if she does, why is that worth mentioning? Male players often can’t play for months at a time due to injury. Do we bring that up by making blanket gender-related statements? FIFA 16 Career Mode: Your male star striker has been ruled out for 8 months due to a broken leg. No we don’t, because reason for injury and being out of a game for extended lengths of time don’t matter. When a pro player is in, they’re in. When they’re out, they’re out. And that’s all there is to it. It’s 2015, y’all. There are women’s sports teams. Over 147,000 women play in FIFA-affiliated leagues and cup competitions. If those sports teams exist, it’s only right that they be included in a video game about their sport. End of story. The negative comments are totally unnecessary.

That is, of course, unless the people telling these “women jokes” are looking to get attention and be written about, in which case, MISSION ACCOMPLISHED. Interesting, considering that so often just about anything women do is considered “attention-seeking” when people don’t like it. It’s funny to see that after these tweets, you see the tweeter’s friends chiming in telling them that the BBC used their tweets in a news item. Cue simultaneous admonishment of the BBC and congratulatory messages to the original tweeter!

Well enjoy these 15 minutes of fame, because when they’re over, you’ll still be the same sad, sexist people you were before, and we’ll all have moved on with our lives.

The one bright spot in all this is that there are plenty of people out there who are quick to let these jokesters know that making jokes at the expense of female professionals is unacceptable. In addition to articles like the one at the BBC, if you look at the #fifa16 women jokes search on Twitter now, you’re more likely to see tweets like this:

We finally get women in a FIFA game (long overdue!) and then my fellow men go making sexist jokes. Dang it I can’t win. #Fifa16

These jokes about women on #FIFA16, no matter how funny they might be, show that sexism is still strong in our society, and that’s sad.