We've finally gotten away from draws, and Magnus Carlsen is up 3-2 in the series. 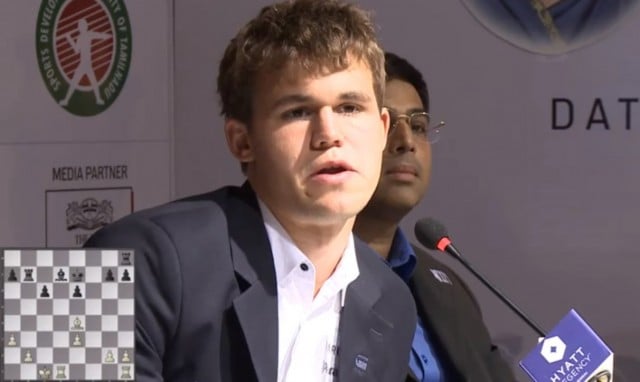 It took five games, but we had our first decisive win of the FIDE World Chess Championship on Friday with Magnus Carlsen eeking out a win over Vishy Anand proving that not all rook endgames are drawn. We’re not picking sides in this event, but we’re still glad to see something other than a draw. Let’s see how Game 6 plays out as Anand takes white.

[Update- 4:02AM ET] The stream and interactive board for Game Six are live! YEAH! CHESS! WOOO!.

[Update- 4:03AM] Realizing now that I may have overdone it on the caffeine this morning.

Games four and five were much longer than the first three, so it seems like our speculation that Anand and Carlsen were using the first few meetings to size each other up has some merit. Carlsen won with the white pieces today, but for games six and seven, Anand has the advantage twice in a row.

Things could easily swing back in Anand’s favor if Carlsen isn’t careful over the next two games, so expect to see him playing for a draw to protect his lead. Though if Carlsen gets confident and has an opportunity he could go for a win, but Anand isn’t likely to give him the chance.