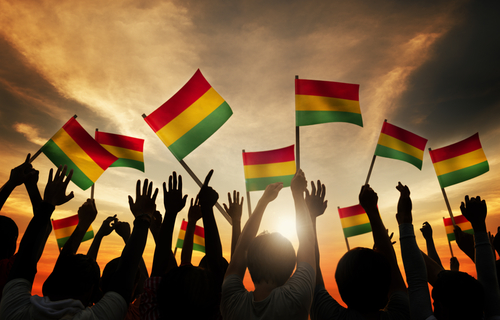 This is a weekly column that captures the news from the time between the last installment and this one. This story out of Bolivia happened a week ago, but came through after Feminism Around the World had already posted. Yet, it’s such a milestone that I decided to give it space today. So, forgive the lateness on this one. Such is the way of things.

Back in May of this year, Bolivia passed a Gender Identity Law, which allows transgender Bolivians to change their names and genders on official documents. This is huge, because Bolivia — like much of Latin America — is very conservative, particularly when it comes to the LGBTQIA community.

According to BBC News, Bolivian President Evo Morales has faced criticism on several occasions, because of disparaging comments he’s made with regard to that community. They report, “In November, he apologised after making a jibe implying his health minister may be lesbian. And in 2010, he caused outrage when he said eating chicken rich in estrogen caused men to “deviate from themselves as men.””

When your President is making those comments, it doesn’t exactly bode well for general sentiments in the country. Then again, the Gender Identity Law did pass.

The law went into effect last week, and transgender citizens in Bolivia began to get their new IDs and paperwork, their national government finally recognizing their gender identities as valid.

Pamela Geraldine Valenzuela, who transitioned at the age of 15 and has been an activist and advocate for the trans community for over thirty years, was the first Bolivian trans citizen to be given a new ID card. Check out this video from The Advocate in which Valenzuela, along with several other recipients of new ID cards, are interviewed and give insight into their stories:

About 1,500 people are expected to take advantage of the new law to have their documents changed, and BBC News reports that “similar laws are already in force in Argentina, Colombia, Ecuador and Uruguay.” Meanwhile, same-sex marriage has become legal in Argentina, Brazil, Colombia and Uruguay, as well as some states in Mexico within the past 5-6 years. While there’s still a long way to go, Latin America as a whole has become a safer, more tolerant environment for the LGBTQIA community that it’s ever been before.

Congratulations to the trans community in Bolivia for always fighting and for winning this revolutionary change.

UKRAINE: “The LGBTQ Activists Fighting for Equality in Ukraine” (Vice, 9/8/16)

UNITED KINGDOM: “Misogyny May Be Recognized Nationally as a Hate Crime Against Women” (Broadly, 9/12/16)