Feminism Around the World: #NiUnaMenos Protest in Argentina Highlights Epidemic of Violence Against Women 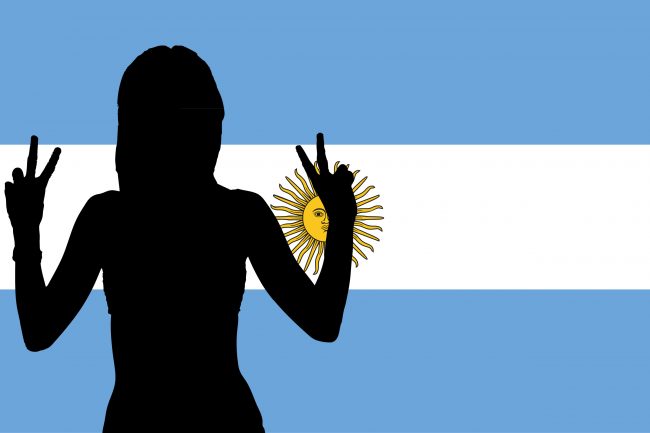 Every 30 hours, a woman is killed in Argentina.

Every 30 hours, a woman is killed in Argentina, and according to The Guardian, of the Top Ten countries for femicide, seven are in Latin America. Last week, it was the brutal rape and murder of a 16-year-old girl named Lucía Pérez that was the straw that broke the camel’s back and sparked half a dozen protests across Argentina that were organized on social media. They marched with the message Ni Una Menos, or literally in English, Not One Less. As in, we cannot allow there to be one less woman in Argentina thanks to femicide.

The Guardian spoke with a woman named Claudia Arias and her aunt Susana Ortiz upon going to one of the protests…then reports that Claudia and Susana were killed four days later, along with Claudia’s 90-year old grandmother, Vicenta Díaz, by Claudia’s ex-partner, Daniel Zalazar. Claudia’s father, Rolo Arias, sadly summed up the problem when asked about his family: “We went to protest at the #NiUnaMenos marches – and then it was our turn.”

It isn’t only Argentina that is at the tipping point of rage about this problem. As you can see in the AJ+ video above, women and activists in other countries like Chile, Bolivia, and Mexico have organized to try and fight this seeming epidemic of femicide in Latin America after the recent murders of women in Argentina, Brazil, Chile, and elsewhere.

In Argentina, the director of Casa del Encuentro, a shelter for abused women in Buenos Aires, Fabiana Tuñez, blames a machismo culture for the abuse and the femicide. After all, Argentina is a country where even though they passed a law defining domestic violence, gender-based killings and other forms of violence against women as “femicide,” their current president, Mauricio Macri, has defended piropos, or “flirtatious comments” men give women in the street (basically catcalling).

When he was mayor of Buenos Aires a couple of years ago, Future-President Macri actually said, ““Deep inside, all women like to hear a piropo, even women who say they don’t. I don’t believe them. There can’t be anything nicer than being told how pretty you are, even if it comes along with vulgarity, like being told what a nice ass you have.”

SO much to unpack there: 1) a woman’s greatest achievement is being pretty, 2) men know better than women what women want, 3) women can’t be believed, 4) suffering vulgarity is a necessary evil as a woman if she expects to be told that she’s pretty, which she should, because [See #1].

And, while there has always been femicide in Argentina, there’s been a notable increase in recent years, which just so happens to coincide with the timeframe during which this sexist Mayor of Buenos Aires became president. [NOTE TO UNITED STATES CITIZENS: DON’T ELECT SOMEONE INTO OFFICE WHO IS VOCAL ABOUT NOT RESPECTING WOMEN IF YOU DON’T WANT TO ENCOURAGE A CULTURE WHERE WOMEN ARE CONSTANTLY KILLED]

However, all of this doesn’t mean that positive change isn’t happening at all in Argentina. After all, another reason why there seems to be an increase in violence against women is as a backlash against the progress women have already made. The Guardian reports that “the increasingly violent attacks can be seen as a crude response to recent gains made by women in Argentinian society, such as laws reserving 30% of elected positions for women. There are now more female university students than males – and statistics show they perform better academically.”

So, as Sabrina Cartabia, one of the #NiUnaMenos protest organizers said, “The violence is a reaction that wants to put us back into a traditional role where we don’t fit any more.” And the backlash continues. Thanks to an email tip from a TMS reader, we were made aware of the counter-hashtag being used by those who would derail the efforts of these protests: #nadiemenos, which is gender-neutral and essentially saying the same thing as #AllLivesMatter. However, it’s clear that the lives of women matter less to the government than those of men.

Jimena Aduriz, whose 16-year-old daughter Angeles was murdered three years ago, has since devoted her free time to volunteering at both the National Council for Women and at the Uguet Mondaca women’s shelter in the suburbs of Buenos Aires. While she acknowledges that an end to this violence is going to require a huge cultural shift (“We have to make people understand that gender violence doesn’t start with the first blow, it starts when the man begins to control the woman, to mistreat her, humiliate her publicly, to tell her what to wear…”), that she sees change happening in the work she does saying, “many lives are being saved thanks to the increasing awareness. I see it at the shelter, many women are now able to escape from abuse and mistreatment thanks to what’s now being done.”

We stand in solidarity with #NiUnaMenos, and as we support their efforts, let’s make sure to keep an eye on what’s happening in the lives of women around us, wherever we are. Sexism, sadly, knows no borders.

(Big thanks to TMS reader Danna for sending an email tip about this hashtag!)

JAPAN: “Tokyo Comic-Con Bans Men From Cosplaying As Women Characters [Update*]” (Kotaku, 10/27/16) *the ban has since been reversed