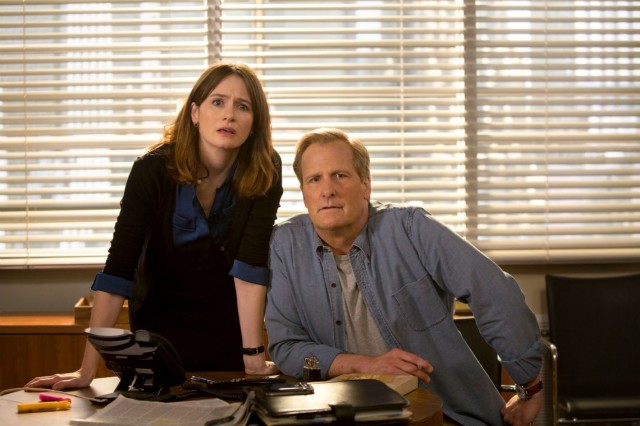 I started seeing rumblings on Twitter last night of some sort of epic train wreck about to take place on HBO’s The Newsroom. The train, it did wreck, but what came after is even more horrifying.

Full disclosure: I’m generally an Aaron Sorkin fan. I’ve enjoyed all of his television series and was head over heels in love with The West Wing, but that doesn’t mean I’m blind to Sorkin’s “issues.”

The penultimate episode of the series, “Oh Shenandoah,” had a staggering amount of WTF for a show which, in my opinion, has done interesting things while reporting on two year old news. While we see the media mess up on a regular basis, The Newsroom effectively has the advantage of hindsight. Learning from the real world mistakes to make their fictional coverage of the same stories as snappy and clever as possible. It’s the kind of thing that makes me sad the series is ending next week. I would have been very interested to see The Newsroom’s version of Ferguson and Gamergate.

Putting aside what won’t be, let’s discuss what is. Last night the show delved into a story involving a college student who, after being raped by two men at a campus party, gets no response from the proper authorities when reporting it. She doesn’t want to see anyone else be hurt by these men and decides to create a website which would allow rape survivors to name their rapists, anonymously or not. Under a new regime at the network, producer Don Keefer is asked to get both the woman and one of her accused rapists on air at the same time. He’s not thrilled with the idea but seeks her out nonetheless to tell her she absolutely should not go on their show.

Emily Nuassbaum writes for The New Yorker on how the scene played out:

When I first watched the scene, I was most unnerved by the way their talk mashed everything together, suggesting that there were only two sides to the question—a bizarrely distorted premise. It’s possible, for instance, to believe (as I do) that a Web site posting anonymous accusations is a dangerous idea and to also think it’s fine for a woman to describe her own rape in public, to protest an administration that buries her accusation, and to go on cable television to discuss these issues. It’s possible to oppose a “live debate” between a rape victim and her alleged rapist and to believe that rape survivors can be public advocates. There was also something perverse about the way the student was portrayed, simultaneously, as a sneaky anonymous online force and also an attention-seeker eager to go on live TV. (And, given the way that Rolling Stone’s Jackie is now being “doxxed” online, it’s grotesque that the episode has the Princeton woman praise Don for tracking her down, “old-school.”) The actress was solid, but the character behaved, as do pretty much all digital women on the show, with the logic of a dream figure, concocted of Sorkin’s fears and anxieties, not like an actual person.

“The kind of rape you’re talking about is difficult or impossible to prove,” Don tells her. It’s not a “kind of rape,” the woman responds sharply. She argues that her site isn’t about getting revenge, that it’s “a public service”: “Do not go on a date with these guys, do not go to a party with these guys.” Don cuts her off: “Do not give these guys a job, ever.” He argues that she’s making it easier for men to be falsely accused, but the woman says that she’s weighed that cost and decided that it’s more important that women be warned. “What am I wrong about?” she asks. “What am I wrong about?”

Yes, they veered into “rape rape” territory because the woman was drunk and high at the time of her attack. It gets worse, and the full piece is definitely worth a read, but the following tweets from The Newsroom writer Alena Smith are the proverbial cherry on top:

As @emilynussbaum points out in her review of tonight’s ep, you can’t criticize Sorkin without turning into one of his characters.

So when I tried to argue, in the writers’ room, that we maybe skip the storyline where a rape victim gets interrogated by a random man…

I ended up getting kicked out of the room and screamed at just like Hallie would have for a “bad tweet.”

I found the experience quite boring. I wanted to fight with Aaron about the NSA, not gender. I didn’t like getting cast in his outdated role

We’ve reached out to Smith for further comment on the situation, but her account leaves us… depressed.

I often talk about infusing writers’ rooms with more diversity to have a more diverse end product. It’s difficult to be the token anything in a room, but with varying experiences comes varying stories. And my thought is, if there’s someone in the room to speak up and say, “hey, maybe we could do this another way” it can only foster the creative experience. Turns out, sometimes you speak your mind and get sent out of the room by your boss like a kid talking during final exams at school.

While horrible rape stories are never exactly out of the news, this episode of The Newsroom came at a particularly coincidental junction. From Bill Cosby’s accusers growing by the day, Canadian radio host Jian Ghomeshi being arrested and charged with four counts of sexual assault after several women spoke out, to Rolling Stone issuing an apology (which they later edited after some said it was victim-blaming) over their handling of the University of Virginia rape story.

Sorkin could have used the opportunity to smack down rape culture. Instead, he helped reinforce it. From Nuassbaum’s piece:

Finally, he reveals his real agenda. He’s heard two stories: one from “a very credible woman” and the other from a sketchy guy with every reason to lie. And he’s obligated, Don tells her, to believe the sketchy guy’s story. She’s stunned. “This isn’t a courtroom,” she points out, echoing the thoughts of any sane person. “You’re not legally obligated to presume innocence.” “I believe I’m morally obligated,” Don says, in his sad-Don voice. WTF LOL OMFG, as they say on the Internet. Yes, that’s correct: Don, the show’s voice of reason (and Sorkin, one presumes), argues that a person has a moral obligation to believe a man accused of rape over the woman who said he’d raped her, as long as he hasn’t been found guilty of rape. This isn’t about testimony, or even an abstract stance meant to strengthen journalism. (“Personally, I believe you, but as a reporter, I need to regard your story with suspicion, just as I do Jeff’s.”) As an individual, talking to a rape survivor, Don says that on principle, he doesn’t believe her.

For a creator to have a soap box as huge as his, who’s constantly using it to make statements about where we go wrong in our country, Sorkin sure did botch this particular storyline.

One would like to be hopeful. To think it wasn’t on purpose. That Sorkin wasn’t purposefully reinforcing the kind of atmosphere where “it’s more dangerous to report a crime than it is to commit a crime.”

Except, those tweets. Someone tried to tell him where he was going wrong and he told them to leave rather than listen to a voice who… gasp… might have been a bit more savvy than him.

[UPDATE] Our sister site Mediaite got in contact with Sorkin on this story. He told them:

Alena Smith, a staff writer who joined the show for the third season, had strong objections to the Princeton story and made those objections known to me and to the room. I heard Alena’s objections and there was some healthy back and forth. After a while I needed to move on (there’s a clock ticking) but Alena wasn’t ready to do that yet. I gave her more time but then I really needed to move on. Alena still wouldn’t let me do that so I excused her from the room.

The next day I wrote a new draft of the Princeton scenes–the draft you saw performed last night. Alena gave the new pages her enthusiastic support. So I was surprised to be told this morning that Alena had tweeted out her unhappiness with the story. But I was even more surprised that she had so casually violated the most important rule of working in a writers room which is confidentiality. It was a room in which people felt safe enough to discuss private and intimate details of their lives in the hope of bringing dimension to stories that were being pitched. That’s what happens in writers rooms and while ours was the first one Alena ever worked in, the importance of privacy was made clear to everyone on our first day of work and was reinforced constantly. I’m saddened that she’s broken that trust.