[UPDATED] This Is Rape Culture: CNN Anchor Suggests Alleged Victim of Bill Cosby Could Have Prevented Her Rape 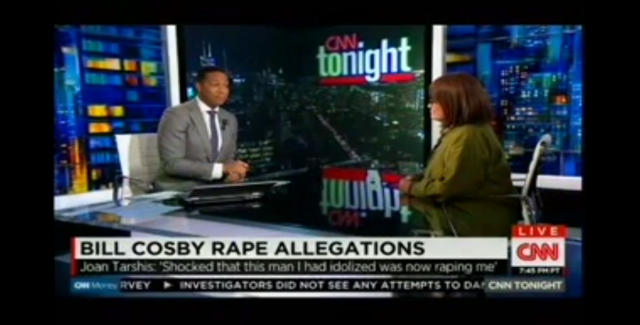 “Why didn’t you do X, Y, or Z?” It’s maybe the most frequent thing said to and about rape survivors. Because in a world where people feel free to viciously assault another human being, the most important thing to find out is whether or not the victim could have prevented it. This happens all the time to those who have been robbed, you see.

Our sister site Mediaite has video of the portion of the CNN Tonight interview in which anchor Don Lemon talks to Joan Tarshis, the woman who recently came forward to say Bill Cosby raped her twice when she was 19. Tarshis is one of 15 women who have come forward in almost as many years to speak up about sexual assault and misconduct from Cosby.

Tarshis had also appeared the night before on CNN to speak with Lemon, who prefaced the second interview by acknowledging that some viewers felt he was too skeptical of her account. He then asked Tarshis if she felt the same way to which she replied, “I thought you were doing your job.” Lemon suggests his next line of questions comes from public opinion, “There are a lot of people who don’t believe you,” but goes on to directly ask her why she didn’t do more to prevent her alleged assault.

“You know, there are ways not to perform oral sex if you didn’t want to do it,” Lemon said. Tarshis said it didn’t cross her mind to do so but wished it had. Lemon didn’t stop there, he went on to specifically suggest she should have used her teeth on Cosby. But don’t worry, he prefaced the whole thing with “I don’t mean to be crude.”

When we learn how to drive we’re taught what to do should we hit a patch of ice on the road. All well and good until it actually happens to you. Human beings are fallible, and we’re not always going to have the reactions we “should” have in any given situation.

You think you’ll know how to react when a loved one dies, but you don’t.

You think you’ll know how to react when someone cuts you in line at the market, but you don’t.

You think you’ll know how to react when you see someone else being hurt, but you don’t.

You think you’ll know how to react when you leave your family home for the first time, but you don’t.

You think you’ll know how to react when someone tries to rape you, but you don’t.

For his part, Cosby has remained silent, simply shaking his head when asked about the allegations on NPR. Later his lawyers posted an official comment on his website which has since been removed and replaced with another for fear that it violated a 2006 settlement with another woman who alleged sexual assault from Cosby.

Though much like the turn Cosby’s proposed meme took on the internet, Twitter is now attempting to make Lemon the butt of the joke with the hashtag #DonLemonReporting. The goal is to ask really, really dumb questions. Just like Lemon did.

If Shamu doesn’t like SeaWorld, why does Shamu keep working there? #DonLemonReporting

But why was MLK even on that balcony? #DonLemonReporting

If you or someone you know needs help, please contact the Rape, Abuse & Incest National Network (RAINN) or another crisis center.

As I am a victim myself I would never want to suggest that any victim could have prevented a rape. If my question to her struck anyone as insensitive, I am sorry as that is certainly, was not, my intention.