Several Female-Created Sitcoms Are In Development for the Fall 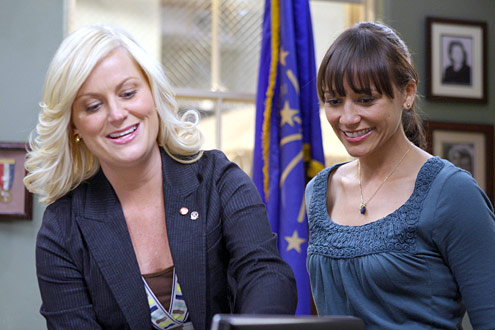 Well, here’s another nail in the “women aren’t funny” coffin: while there are no guarantees of a series pickup this early in the game, several sitcom pilots created by women are currently in development for this fall. But some shows are getting a lot of early buzz, so there is a very good chance that we’ll be seeing a more even primetime playing field come September! Click through for a look at who might be joining the ranks of Amy Poehler and Tina Fey.

Besides this being a great sign for female comedy writers who have been on the staffs of other successful shows (like Parks and Recreation, Children’s Hospital, and Will & Grace) and are getting their chance to lead their own, it’s also a sign that studio executives are loosening up on their “boy’s club” mentality and are willing to give more new voices a chance to be heard. Here are some of the new shows:

ABC: Apartment 23, about a Midwestern girl who moves to New York and ends up with an “amoral roommate,” from Nahnatchka Khan (American Dad, Malcolm in the Middle)

Also Suburgatory, about a teen girl forced to move to the suburbs, from Emily Kapnek (Parks and Recreation, Hung) and Bad Mom, set to star Jenna Elfman and be written by British writer/actor Sharon Horgan.

NBC: A sitcom inspired by Chelsea Handler‘s autobiography Are You There Vodka? It’s Me, Chelsea has been written by Dottie Dartland Zicklin and Julie Larson (both of Dharma & Greg) as well as another autobiographical sitcom centered around standup comedian Whitney Cummings. That will be executive produced by Betsy Thomas (My Boys). Lorne Michaels is also behind another new show being developed by Emily Spivey, who writes for Parks and Recreation.

And there are more that are still gathering momentum. In short, this is excellent news.