Female Athletes Most Trended of the Olympics | The Mary Sue

Female Athletes Were the Big Trending Stars of the 2012 Olympics

There’s been a lot of discussion surrounding the role of women in the London 2012 Olympics. It was the first Olympics in which every participating country allowed women to compete, where an African-American girl took home gold for the Olympics team for the first time, and where McKayla Maroney‘s Vogue face took over our computers with its pure memeability. Ryan Lochte may have shown the world that he’s essentially a real-life Hansel from Zoolander, but it was the female athletes who really made a splash when it came to their impact on social networking sites.

AddThis–a content-sharing platform that crunches the numbers on social media sites–took a look at social media activity before and during the Olympic games, and saw that, of the five athletes who received the most buzz, all were women. Furthermore, most of these ladies didn’t have huge fanbases before their first appearances in London, which indicates that it’s what happened during the games that launched them to social network dominance.

Both Jezebel and Wired point out, though, that the discussion surrounding these women has been a double-edged sword, as people seemed just as likely to be talking about their awesome athletic prowess as their physical appearance.

This isn’t a strange thing for any gender of athlete; Tom Daley, for instance, has taken over my Tumblr dashboard with his habit of looking like a young, ripped Rupert Graves, and Ryan Lochte, while hilariously ridiculous whenever he opens his mouth, is widely considered quite the looker.

Olympic athletes essentially have the bodies and athleticism of real-life superheroes; as a visually-stimulated culture, it makes sense that we’d take notice. This can backfire, though, when the discussion turns negative. We’ve already talked to you twice about the (to say the least) frustrating nature of the “controversy” over Gabby Douglas‘ hair, and that topic took up an annoyingly sizable portion of the social network discussion of the gold-medal winner. 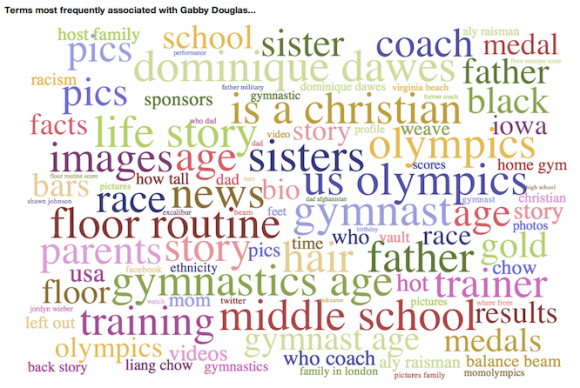 The world has an interesting relationship with its Olympic athletes, America in particular. It’s almost like they’re half hard-working stranger, half movie-star. We want to see them win the gold, and then we want to know all about their diets, their personal grooming habits, and who they’re dating and why it’s not us.

We may not be to a place where we can completely be rid of the not-completely-relevant bits of conversation surrounding these über-athletic celebrities–and some of those conversations may make us want to bash our own heads into a wall repeatedly–but there’s no denying that the fact that so much of the conversation is being dominated by the accomplishments of women is still a great step forward.

And as Jezebel points out, having such a tangible record of their popularity might help more of these female athletes score top-rate endorsements, which is an area in which the gender gap has been especially felt in the past. It also says something about the coverage that just doesn’t happen much beyond the Olympics and their massive ratings:

The percentage spike in discussion about female athletes before and during the actual games reveals that the public has a genuine interest in learning more about women who don’t necessarily attract a lot of attention beyond the Olympics.

Douglas Warshaw, former producer for NBC and current founder of First-Person Communications, said this on the prevalence of trending female athletes:

“I think women athletes resonate the most with us because they don’t get the coverage day in and day out in between the Games. So there’s something novel about the way that they’re covered during the Olympics, and that adds to their appeal. When they get on this incredible stage and they do things that reveal themselves emotionally and through their physicality, it is as dramatic as television gets.”