For $2 an Hour, Female Inmates Are Fighting California Wildfires

What is the price of labor? 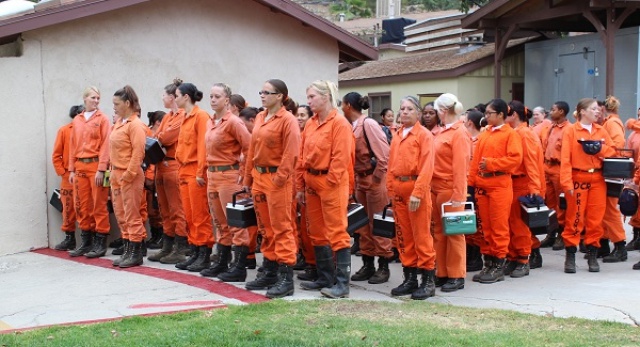 The wildfires in Northern California have caused unimaginable devastation to the people in that area with at least 23 people and possibly hundreds more missing, according to reports from ABC News. Those on the front lines are risking their lives and limbs in order to halt some of that devastation. In California, a huge percentage of the firefighting force comes from inmates male and female who have taken on this responsibility for some more freedom—and the promise of $1-$2 a day.

NBC News reported that roughly 3,800 inmates (13 percent of California’s firefighting force) are enrolled in the fire program, which saves taxpayers $124 million a year. In these programs, women do the same work as men, and are broken into teams of fourteen with chainsaws and other equipment to help cut cement lines that will hopefully stop the fires from spreading.

In interviews with NBC and the New York Times, many of these women talk about how the experience is, in many ways, positive for them since it offers them more freedom than a typical prison experience. To be in the program you have to be a non-violent offender with no history of sexual offenses and pass a physical exam. In return, they make $2 per day in their fire camp and $1 per hour for time on the fire line, which is better than the usual 8 cents and 95 cents an hour that California inmates make. The camps also allow women to have family visits and it is a much cleaner environment.

Some, like Gayle McLaughlin, the former mayor of Richmond, California, and a candidate for lieutenant governor in the state, see the darker side of this program. It may be offering women these opportunities, but it is still slave labor. “They must be paid fairly for each day of work – and $1 an hour is not fair pay,” she published on her campaign website. “No matter how you may want to dress it up, if you have people working for nothing or almost nothing, you’ve got slave labor, and it is not acceptable.”

David Fathi, the director of the A.C.L.U. National Prison Project, posed this question to Jaime Lowe of the New York Times: ‘‘I think one important question to ask is, if these people are safe to be out and about and carrying axes and chainsaws, maybe they didn’t need to be in prison in the first place.’’

If these are non-violent offenders it means they are jail most likely for drug-related charges, and considering California’s three-strike-rule, for some of these women, programs like these are the only way they can have any hope. Even if it is a muddy hope.

In Lowe’s article back in August, she brought up the story of Shawna Lynn Jones, 22, who was in jail for repeated drug violations. She was one of the women in the fire program who died when a large stone fell 100-feet struck her in the head, killing her instantly. She had less than two months left to go on her three-year sentence. During her four months as a firefighter, Rowe made around $1,000. The salary of a civilian firefighter is $40,000.

If these women (and men) are going to be putting in this kind of deadly work, then $2 an hour is an unacceptable amount of money for them to be paid. They are saving lives and protecting their fellow citizens by choice.

Additionally, this program doesn’t even make attempts to hire these trained women when they are released. Considering that only 7% of firefighters are women and these are people who have the experience, it would seem like an easy investment. Yet when asked that question by Lowe, Danny Ramirez, a California Fire Captain, said “it’s hard when they get out there because they do have a lot of the same walls that they were facing before. But a program to keep them guided and keep them on that path and keep them focused on something instead of getting back into their old ways or old friends would be awesome.’’

Yes, that would be awesome.