Who Run The World? 8 Great Female Characters You May Have Missed in 2017 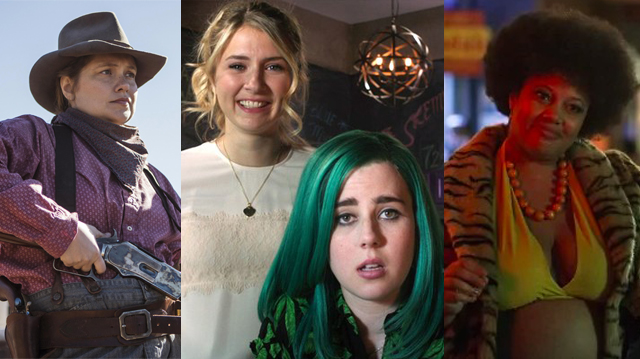 One of the grimmest Onion articles in recent memory was “Abusive Father Can’t Wait To See The Art He’s Inspiring His Kids to Create,” and sometimes that’s what pop culture in 2017 felt like, as well. 2017 began with the inauguration of a man credibly accused of sexual assault by nearly 20 women and ended with the exposure of countless men accused of similar misdeeds.

Small wonder, then, that some of the year’s most feel-good cultural moments involved fictional women refusing to be silent or still, from Wonder Woman’s stride across No Man’s Land to the cathartic climax of Big Little Lies, to The Handmaid’s Tale’s mantra: “Don’t let the bastards grind you down.” There was such an embarrassment of riches that, as in 2015, some of the best female characters of the year slipped comparatively under the radar. Here are a few of those you may have missed, and how to remedy that.

Netflix’s revisionist Western earned critical praise when it came out this November, but also received some not-undeserved flack for marketing that implied a feminist, woman-centered story but turned out to focus on the relationship between two men. This turned out to be a damn shame, because the series is crawling with dynamic women characters who deserve to be the hero of their own story, particularly Mary Agnes (Merrit Wever), the widow of the town’s mayor and his de facto successor.

In the wake of the mining accident that killed the vast majority of the town of La Belle’s male population, Mary Agnes lets loose as much as a woman in the Old West can, embracing her bisexuality and wearing men’s clothes. Wever, who’s been on a TV hot streak that ranges from Nurse Jackie to New Girl to The Walking Dead, makes clear with her performance that Mary Agnes is a born leader, initially kept from realizing that potential by nothing but her gender. “I’m done with the notion that the bliss of me and my sisters is to be found in childbearing and caregiving,” she says at one point, succinctly summarizing both her own philosophy and what the series could have been.

Rachel Childs, Since We Fell

Rachel is the first female protagonist written by Dennis Lehane, author of Gone Baby Gone, Mystic River, and Shutter Island, but when I met Lehane at Washington, DC’s venerable bookstore Politics & Prose this spring, he said that wasn’t a conscious decision; rather, she came to be simply because he wanted to write “a Hitchcock.” Like Hitchcock’s protagonists, she’s not a cop or a spy or a criminal, simply an ordinary person thrust into extreme circumstances.

Rachel’s promising career as a reporter comes crashing down when she has an on-air nervous breakdown covering the post-earthquake devastation in Haiti. She becomes a shut-in, only to slowly find a new lease on life thanks to the help of a handsome private investigator from her past. This being a thriller, of course, she soon discovers evidence he’s not what he seems, and overcomes her fear of the world around her to get to the bottom of things. Rachel demonstrates a strong female lead need not be invincible; she’s at a physical and mental disadvantage for most of the novel, but her spirit, cunning, and sheer relatability to anyone who’s ever felt the weight of the world will make you pump your fist for her.

An old saw says that while you’re an orphan if you lose your parents and a widow if you lose your spouse, there’s no such term for when you lose your child because it’s so devastating as to be indescribable. Mildred Hayes (Frances McDormand) may be devastated, but she certainly doesn’t lack for words. Frustrated by the local police department’s failure to solve her daughter’s rape and murder, Mildred pays for the titular billboards, to the chagrin of the sheriff (Woody Harrelson), his bumbling, racist deputy (Sam Rockwell), and her own introverted son (Lucas Hedges).

The movie never comes out and tells us whether we should think Mildred is doing the right thing, but it also lets us feel like we don’t have to be sure one way or the other. Irish writer/director Martin McDonagh has been criticized for making his female characters nonentities, to the point of his own characters issuing thinly-veiled self-criticism, but Mildred is a titanic, ferocious, frustrating, wonderful portrait of the rage and irrationality of grief, brought to life by one of the best actresses of her generation. The true-crime podcast business is booming, but it often feels like murder is the crime that has a monopoly on this cottage industry. Not so for Crimetown, Marc Smerling and Zac Stuart-Pontier’s third collaboration after Catfish and The Jinx. In this podcast’s first season, they drill deep into the criminal culture and history of Providence, Rhode Island, and introduce one of its most indelible characters in the thirteenth episode, “The Network:” Arlene Violet, who left the convent where she’d acquired the nickname “Attila the Nun” to get her law degree and, in 1984, became the nation’s first woman State Attorney General.

As the podcast unfolds, Violet becomes a tragic Cassandra figure, sounding the alarm that the state’s banking system has made risky loans to mob-connected figures and left the insurance fund backing the system nearly empty. Her true story’s themes of strong women in a “man’s world,” blurred lines between government and organized crime, and banks acting without fear of punishment all feel extra-relevant today; check out the first season before it starts again with a whole new city.

Television, in recent history, has seen no shortage of protagonists driven to criminal or amoral acts out of love for their family or need to survive, but Desna (Niecy Nash) differs from most of the rest by virtue of being black, female, working-class and genuinely nice. This severely underrated TNT series chronicles Desna’s exploits as she runs a Florida nail salon that launders money for the pill mill with which it shares a strip mall, itself an organized crime front.

Her loyalty, though, is not to her murderous superiors (led by Breaking Bad’s Dean Norris), but to her intimate crew of best friends who operate the salon with her, as well as her autistic brother (Harold Perrineau). Like the aforementioned Big Little Lies but for the 99 percent, Desna’s story is often violent, suspenseful, and tragic, but is, at heart, not about a crime so much as these women’s relationships with one another and how the world they live in affects them. When the great crime novelist Megan Abbott signed up as a writer on this HBO series about the sex trade in 1970s Times Square, her immediate reaction to this sex worker, only being referred to in the script as “Thunder Thighs,” was “You need to give her a real name.” In a vacuum, this seems like one more anecdote about the obvious value of including women when you write about women, but it’s also key to what makes Ruby (Pernell Walker) the beating heart of “The Deuce.”

There are numerous other sex workers walking the stretch of 42nd Street between 7th and 8th Avenues that gives the show its name, but Ruby embodies one of the series’ biggest themes: just how easy it is for the obvious fact of these women’s humanity, hopes, and dreams to get lost in the shuffle, once their bodies are part of the capitalist system. Without spoiling anything, the reason why the season finale is titled “My Name is Ruby” will, at the risk of sounding like Upworthy, break your heart.

I’m cheating a bit on this one because while this MTV series began its run last November, its lamentably sole season ended in late January and, as you’ll see, it was very much a show for 2017, no matter when it started. Jules (Eliza Bennett), a sweet-natured sorority member who unironically says “gosh darn it,” and Ophelia (Taylor Dearden), a green-haired stoner wiseass, seem to have nothing in common beyond attending the same college, but once the two hit it off, they embark on a new project: dressing in black and patrolling the campus by night to beat the absolute hell out of the (far too numerous) rapists who walk the quad unpunished.

There’s enough raw wish fulfillment in the premise that a lazier show might not feel the need to develop the characters themselves, but Sweet/Vicious goes all in and gives them hopes, fears, flaws, and the kind of bond that makes you drive at night and belt out “Defying Gravity” from Wicked together. Like a lot of shows that never got the chance they deserved, the series’ fans are still calling for a continuation through another network or a streaming service, but with some luck, we’ll get a revival in the real world, too.

Zack Budryk is a Washington, D.C.-based journalist whose work has appeared in The Guardian, Style Weekly and NOS Magazine. His novel Judith, a feminist crime thriller, is available now.