Don't You (Forget That With Great Power Comes Great Responsibility) 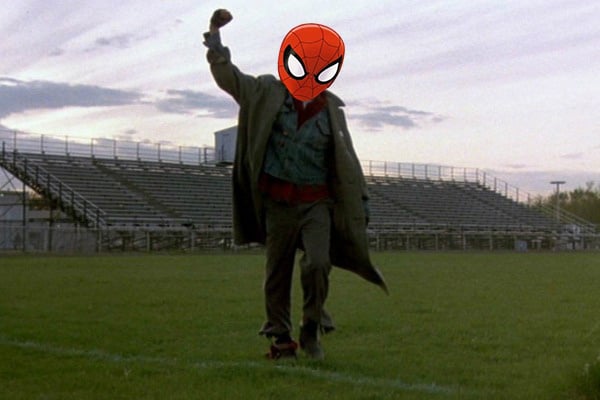 In an interview with Birth.Movies.Death., Marvel movie big boss Kevin Feige shared some details about the new Spider-Man movie that’s sure to be coming down the pipes. To be fronted by Tom Holland, Feige says the new movie should hone in more on some of the high school-type drama that seems to exemplify early Spider-Man storylines.

Of course, you can’t talk high school drama without mentioning the very ringleader of the Brat Pack himself: the late, great John Hughes. Said Feige:

Stakes don’t need to be end of the world. Oftentimes, in our films, it is, and in our future films Thanos doesn’t work small. But sometimes the stakes can just be ‘Will this little girl grow up to be healthy and well put-together, or are there too many issues for her to overcome?’ That’s HUGE! That overrides a threat to reality itself. And I think Spider-Man straddles that line in a fun way in his comics. What we wanted was a movie where the stakes could be as high as ‘This bad person is going to do this bad thing, and a lot of people could die’ OR ‘You don’t get home in time and your aunt is going to figure this out, and your whole life is going to change.’

Rest assured, the movie won’t be just a long episode of Degrassi (although… never mind). Feige is acutely aware of what makes these movies the blockbusters they are. On possible villains, Feige said, “Right now we’re interested in seeing villains we haven’t seen before.”

We’d be curious to see what villains they’re possibly looking at. But considering this movie is pretty darn far away, we’re cursed to sit here and wait patiently.

Here’s our pitch for a possible ending: Peter Parker sits perched atop a football goal post, the wind blowing through his hair as he broods/emotes/says something about protecting those he loves. Camera pans down to show a ghostly Uncle Ben smiling up at the hero. He turns, shoves one of his hands in his coat pocket, and thrusts the other one into the air triumphantly. Freeze frame, slow fade out as Simple Minds’ “Don’t You (Forget About Me)” plays over the credits.

No? Then how about this movie where Peter Parker has a day off and he tries to convince Harry Osborn to hang out, look at paintings in a museum, and dance and sing in a parade, but in reality Peter Parker is just a hallucination…