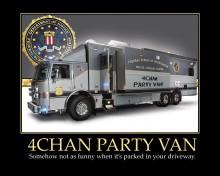 Remember how the Internet vigilantes of loosely 4chan-affiliated online collective Anonymous launched waves of distributed denial of service [DDoS] attacks in protest of current copyright law enforcement? Well so does the FBI, according to a hot-off-the-presses CNET report, and they’re none too happy about it.

4chan’s/Anonymous’ DDoS protests managed to take down, among other targets, the websites of the MPAA and the RIAA, the personal site of rocker and outspoken file-sharing hater Gene Simmons, who said that the attackers “might find their little butts in jail, right next to someone who’s been there for years and is looking for a new girl friend,” and the United States Copyright Office’s site.

While the FBI says the attacks had been on its radar for some time, the DDoS on the U.S. Copyright Office’s site has upped the stakes.

While one of the 4chan group’s most recent attacks came last week against the Copyright Office, it is believed that the FBI began asking questions prior to that, said the source. Since the Copyright Office attack, however, FBI agents have begun working closely with many of the organizations attacked, the source said.

Just last week, a 23-year-old student named Mitchell L. Frost was sentenced to 30 months in prison for DDoSing the websites of conservative figures including Bill O’Reilly, Rudy Giuliani, and Ann Coulter between August of 2006 and March of 2007.

Previously: 4chan versus the Tea Party.