Trolling victims, or the most brazen trolls yet? Redditor choochy spotted this bumper sticker from an Oregon Tea Party group which steals one of the most recognizable Anonymous slogans: “We are Anonymous. We are Legion. We do not forgive. We do not forget. Expect us.” Its veracity has been called into question by some Redditors, but one found a since-deleted cache item from the Portland Tea Party’s “Tea Party Patriots” page in which the slogan is used as the group’s primary description.

Update: A little more evidence that the slogan was legitimate: The Next Web has what looks like an email exchange with the head of the Oregon Tea Party. Note that the response is from 3:03 PM, so the sender would have to be in Europe or another time zone east of EDT for this to be legit. 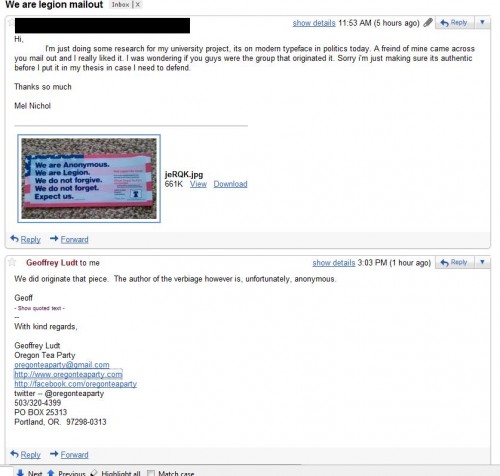 Even more frighteningly, the slogan has appeared at some real-life Tea Party rallies, suggesting that it has been ripped off by Tea Partiers on a broader scale, most of whom probably have no idea of its origins: 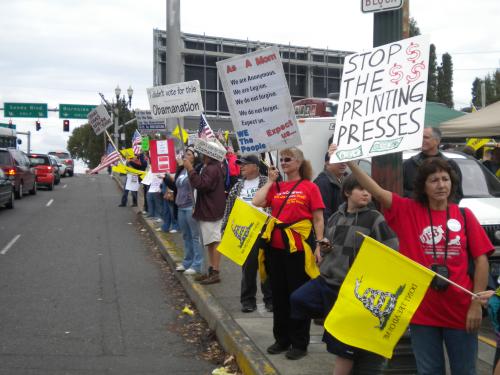 The slogan of moms, indeed.

Now, it’s worth pointing out that Anonymous and 4chan are far from the same thing: 4chan is one of the group’s highest-profile strongholds, but it has plenty of other online hangouts and affiliations. Still, the Tea Party is definitely not one of them. One thing is for sure: Anon is going to be pissed about the theft of their slogan by Tea Partiers, if they didn’t secretly socially engineer the whole thing.

Update 2, 2:50pm: It looks like the Oregon Tea Party is currently under attack. Their Facebook page is currently being flooded with Desus, Heracrosses, and links to sex toy websites, among other things: 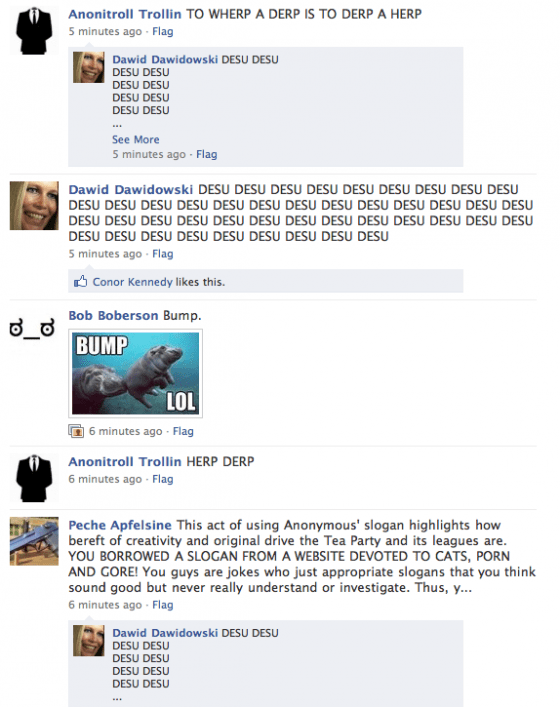 Update3, 4:33pm: The Oregon Tea Party will no longer be using the slogan. They write that they “appreciate [Anonymous’] resources” and “admire [their] tactics.” Hurm.