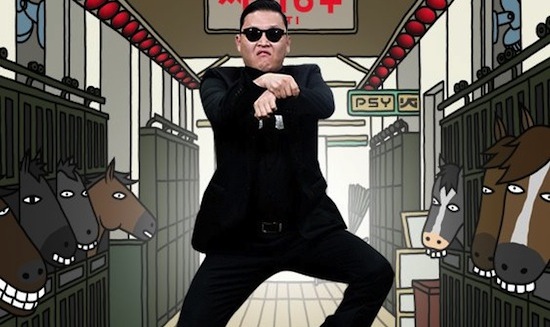 There’s no good way to explain the sudden spike in the share price of Korean semiconductor manufacturer DI. Over three weeks, the company has rocketed from around $1.80 to $5.12 a share. The shift is baffling, considering that there’s been no change financially for the company otherwise. It’s not like they unveiled some amazing contraption that might drive such growth. DI’s main shareholder, however, just so happens to be Park Won-ho. He’s the father of Park Jae-sang — as in PSY, the performer behind the immensely popular “Gangnam Style” song.

Somehow, his son’s musical success has translated to a massive boost in confidence for Park Won-ho’s company. According to The Economist, “Gangnam Style” is on top of the pop charts in Britain and has hit number two in the United States. It’s become a massive YouTube sensation and the number of parodies are out of control.

The Economist claims that this massive spike is due to local investors, called gaemi-deul or “ants” by more professional investors. Due to the popularity of “Gangnam Style,” they’ve been swarming around the stock. How they think PSY’s antics will somehow influence his father’s company is beyond speculation. Maybe he’ll challenge them to a dancing competition like in the video.

DI’s stock is just the latest in a series of odd stocks invested in by Koreans. These are sometimes chosen due to a marriage between company’s or because of a rise in popularity of a figure associated with the company, as is the case with DI. It’s not exactly a lucrative method of investing, but people are going to back what they want. How else does one explain Justin Bieber?