I cannot repel feels of this magnitude. 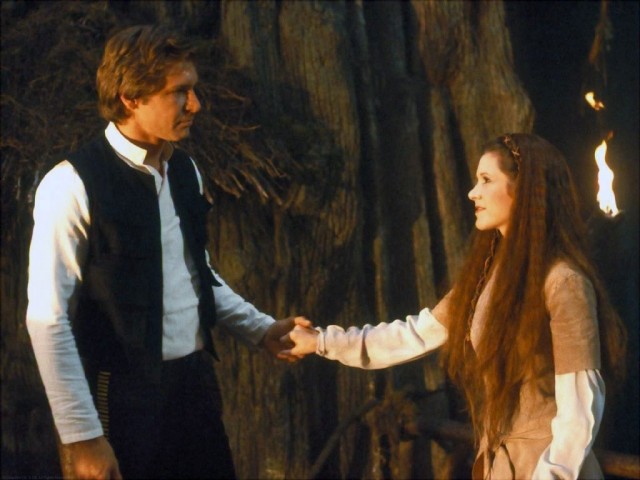 In the Halloweens since his seven-year-old daughter first started making costume requests, Burns has chaperoned trick-or-treating while dressed as Heinz Doofenshmirtz, Wreck-It Ralph, and even Grunkle Stan from Gravity Falls. This year, Burns planned to dress as Snape or Lupin to match his daughter’s Hermione costume, but all that changed when she watched Star Wars for the first time.

According to Burns, after finishing the original trilogy his daughter asked if she could instead dress as Han Solo this year:

Immediately, I responded, “Yeah, why, of course, you could. That would be amazing. Why couldn’t you be Han Solo?” And, even though I didn’t want her response to come, it did. “Welll…. I’m a girl.”

Screw that. I grabbed my laptop and started showing her some really excellent examples of other girls and women cosplaying as Han Solo. She nearly shrieked when I showed her one of the members of Team Unicorn (a geek-girl pop culture group that she loves) in full Solo regalia, and then I found this extremely cool tutorial on how to make a Han Solo costume for a woman from The Stylish Geek.

My daughter’s eyes went wide. She was sold on the idea. This could happen. But then she turned and looked at me: “But what are you going to be?” She thought for a second and said, “Well, if I’m Han Solo, you should probably be Princess Leia, I guess…” She looked at me with an implied question in her eyes. And, c’mon, if I immediately told her, “YES, a girl can be Han Solo,” it would’ve been pretty hypocritical of me to say, “Nope, a boy can’t be Princess Leia.” So, as quickly as I could, I said, “That would be FANTASTIC. I totally should be Leia.”

To read more about the Burns’ Halloween or to see pictures of the duo’s excellent costumes, you can catch the full essay over on Huffington Post. Papa Leia has already attended one Halloween event wearing the HerUniverse New Hope hoodie with built in hair-buns, while his daughter looked rad as all-get-out in Han’s spacer black vest and Correllian Bloodstripes. Kudos to Burns and his daughter for reminding us all that nerf-herding knows no gender (especially when the two could have just as easily gone the Han/Wookie route).

May you two scoundrels have a very happy Halloween!