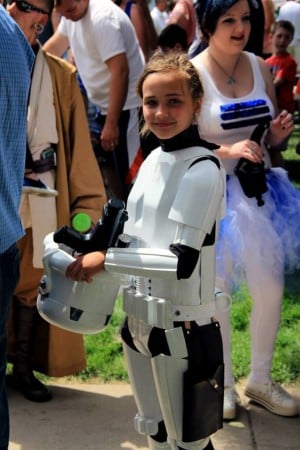 I guess they have a lot of Clone War crimes to atone for: an international group of Star Wars fans named after Vader’s 501st Legion have gone from battling Jedi to gender bias. The world’s largest Imperial costuming organization is giving girls literal armor with which to protect themselves from bullies: a pint-sized Stormtrooper outfit built to the exact specifications of the original movies.

In her article Aren’t You A Little Short For A Stormtrooper, blogger Carrie Goldman reveals the freedom of expression that the Legion has given her daughter and other budding Star Wars fans. In 2010 the group of cosplayers (many of whom experienced bullying firsthand during an online incident in 2012) supported Goldman’s daughter Katie when she was taunted for loving a Universe that was “only for boys.” In 2012, the organization rallied together to give Katie a Halloween costume that would know no gender. Writes Goldman on her blog:

The 501st decided to make Katie her own set of custom Stormtrooper armor, built to the exact specifications from the original Star Wars movies in the ‘70’s. Two years ago, Katie became an unexpected symbol of geek pride and anti-bullying. Her story touched something deep in the core of the 501st — a desire to always stand up for what you believe in –and based on those strong feelings, the members of the 501st wanted to make her a Halloween costume that no other child could replicate. Katie would become a Stormtrooper, as if she had stepped onto the set of a LucasFilm movie.

But one does not simply become a Stormtrooper (even if you skip the Jango Fett step). It took six weeks, contributions of parts from fans around the world, and

an extensive list of precise measurements […] Very precise, as in: Circumference of palm not including thumb; Forearm, inside length from wrist (bent forward) to inside of the elbow; Circumference of thigh just above the kneecap

before the galaxy’s most impressive Halloween costume was presented to Katie at a ceremony attended by a Jawa, a platoon of troopers, and even Vader himself. 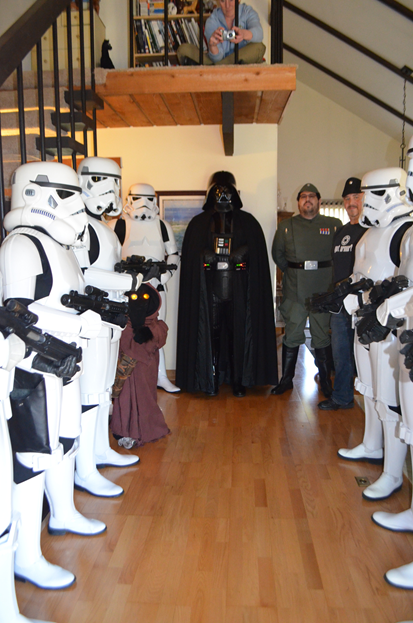 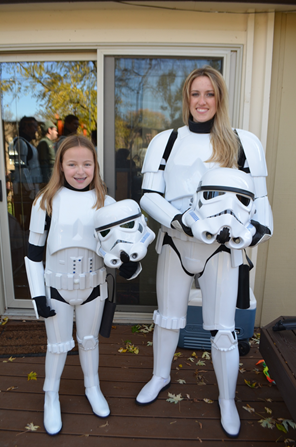 However, the trooper suit is the gift that keeps on giving. On Monday Goldman reported that the 501st and Katie had decided to pass the costume on to Allison, an eleven year-old that was “taunted, ostracized, and even physically attacked by her peers” for bringing a Spider-Man lunchbox to school. (Seriously, peers? You are the worst.) 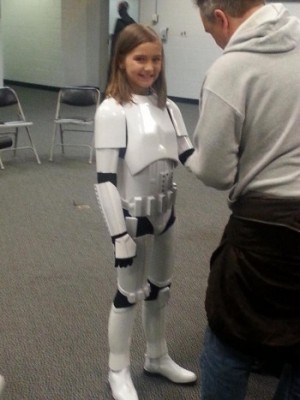 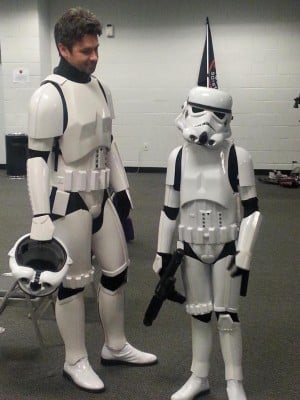 As Legion member Brian Troyan told Goldman in an email, in its new home the suit will remind Allison “that she shouldn’t ever need to hide who she is.”