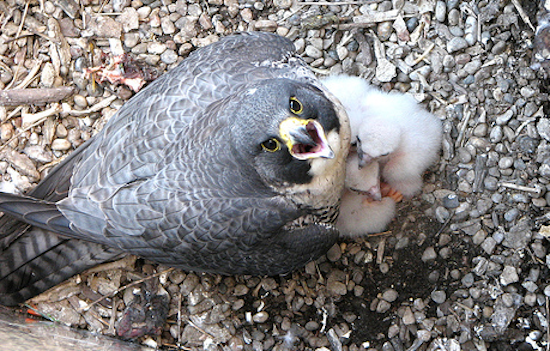 Good news? A family of endangered peregrine falcons has taken up residence in a U.K. cell tower. Bad news? Since U.K. endangered species laws prevent people from messing with the nests of endangered birds and potentially disturbing their rare offspring, technicians are unable to conduct maintenance on the tower and have been forced to shut it down, leaving customers in the area lacking a cell signal until July, when officials — and customers — hope the baby birds will have grown old enough to leave the nest.

While the birds usually make their homes in rocky cliff tops, where they have a minimal effect on cell phone coverage, this family seems to have more of an affinity for human society, making them kind of a hassle for customers of Vodafone, the company that owns and operates the tower. Vodafone is reviewing its options and trying to get a backup plan in place according to a statement, but until they do, customers are out of luck and out of touch.

The affected tower is near the town of Southampton, though it’s exact location is being kept a secret to prevent it from becoming a destination for well-meaning gawkers who could disturb the flying family. The peregrine falcon was almost wiped out in the 1960s after pesticides crippled its ability to breed effectively, and there are just 1,400 breeding pairs of peregrines left in the U.K. today. That being the case, messing around with a nest of the birds is taken pretty seriously, and can be punishable by jail time.