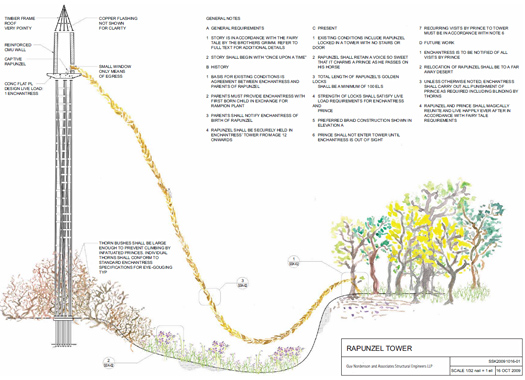 Houses or other abodes play an integral role in several fairy tales; Hansel and Gretel is a great example. But things get a bit complicated when you try to wrap your head around some of the more fantastic houses in literature. Well a children’s book author and a few architects recently got together to try and show just what the homes in stories like Rapunzel, Jack and the Beanstalk and Baba Yaga would look like if they drew up blueprints for them.

Author Kate Bernheimer and architect Andrew Bernheimer write about their series, saying architect firms “selected favorite tales and produced works exploring the intimate relationship between the domestic structures of fairy tales and the imaginative realm of architecture. Houses in fairy tales are never just houses; they always contain secrets and dreams. This project presents a new path of inquiry, a new line of flight into architecture as a fantastic, literary realm of becoming. We welcome you to these fairy-tale places.”

Above is the master image of Rapunzel’s tower, designed by Guy Nordenson and Associates. Here are the notes: 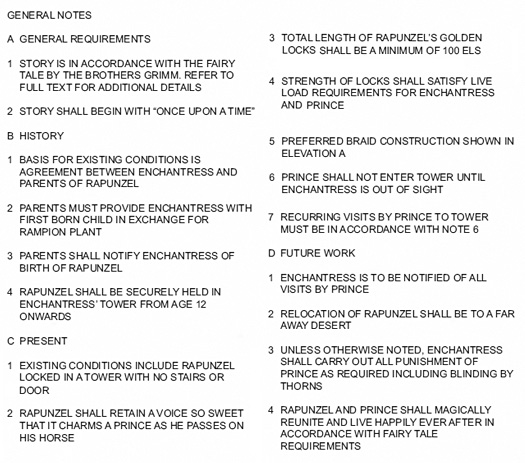 They were asked: What are the key elements of your architectural design and how is it sited?

As structural engineers we were instantly drawn to the “tower that stood in a forest and had neither a door nor a stairway, but only a tiny little window at the very top” featured in the Brothers Grimm version of “Rapunzel,” and we looked to our previous design for the Seven Stems Broadcast Tower for inspiration. We were able to meet the Grimms’ strict design requirements by employing a slender tower design of vertical cylindrical stems that are joined by intermittent outrigger beams with a reinforced space at the very top for Rapunzel’s long captivity.

The notes on the tower itself are pretty awesome too, especially the bit about the Princes. 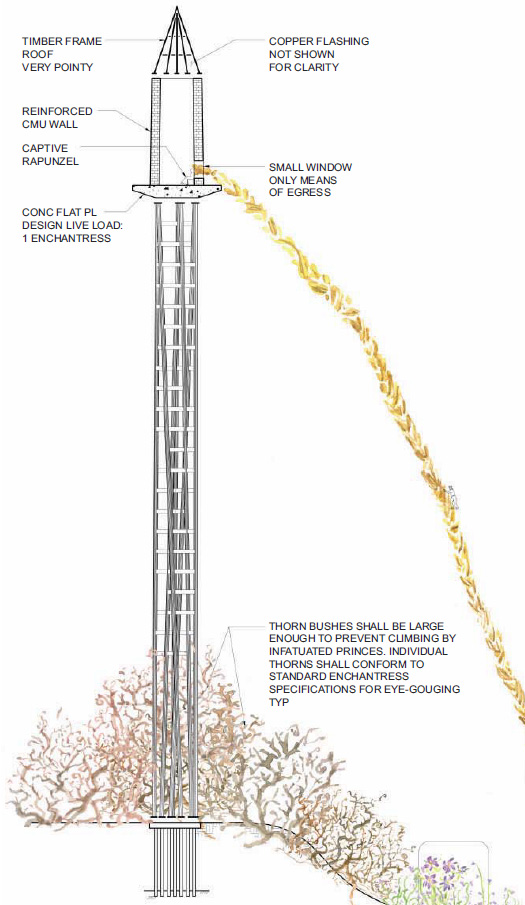 Next up we’ve got Jack and the Beanstalk as designed by Leven Betts with Bret Quagliara. They decided to focus on the beanstalk itself and it’s a bit more techno. 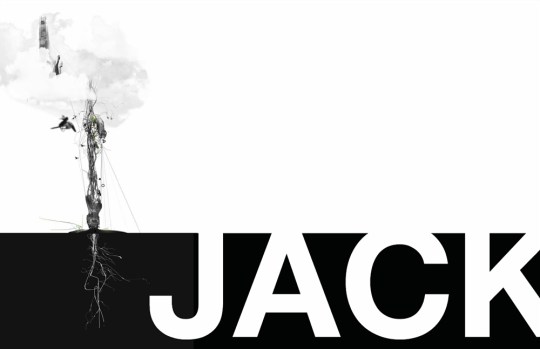 How did you settle on the most important space of the fairy tale?

We were interested in the beanstalk itself — the place between the ground where Jack and his mother live and the sky where the Giant lives.

When you were a child, was there any structure you encountered that reminded you of a fairy tale then, or does now? Can you describe it?

Not really, though giant trees are very magical.

What are the key elements of your architectural design and how is it sited?

And yes, that is a chicken with a propeller. 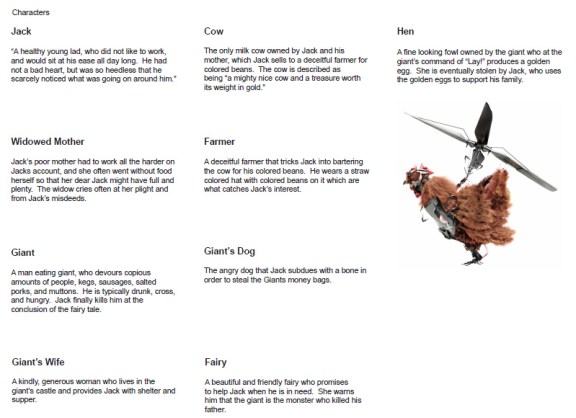 And then we have the infamous chicken-foot house of Baba Yaga by Bernheimer Architecture. The write, “Baba Yaga is one of the most impressive figures in Russian folklore. An old woman with witch-like powers, she flies in a huge mortar, using the the pestle as a rudder, or sometimes on a broomstick.” 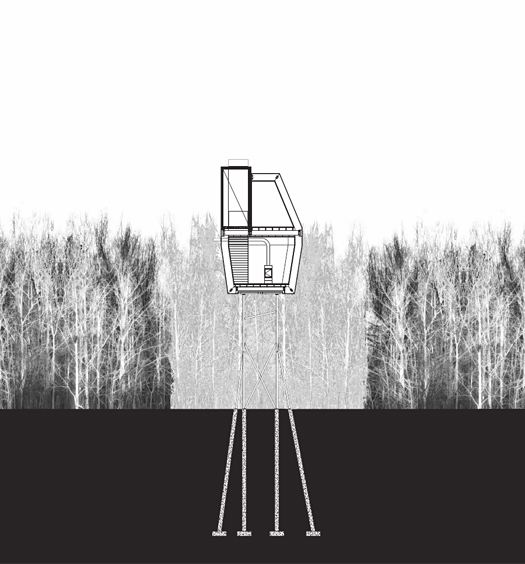 How did you settle on the most important space of the fairy tale?

We determined that the house on chicken legs was, however obvious, an opportunity for interpretation. Houses can’t really look like chickens, can they? So we thought about how one might make a structure or an architecture “chicken-like,” both externally and internally.

What are the key elements of your architectural design and how is it sited?

The house is located on a clearing along a major flight path to the Vladivostok airport. The white and red knights, signifying daytime and nighttime, are the airplanes that travel along this corridor at different times of day. The house, made from a thickly insulated steel frame, is wrapped in tree bark and bulges, like a chicken’s belly perched on a steel structure. A spinning turntable sitting on a large thrust bearing allows the house to spin and reorient itself. A large Corten steel box mimics the airplane landing path, and serves as the entry and exit point for Baba Yaga, whose broom rack sits within that space. A small, wood-burning stove occupies the main living area, compact but deformed. 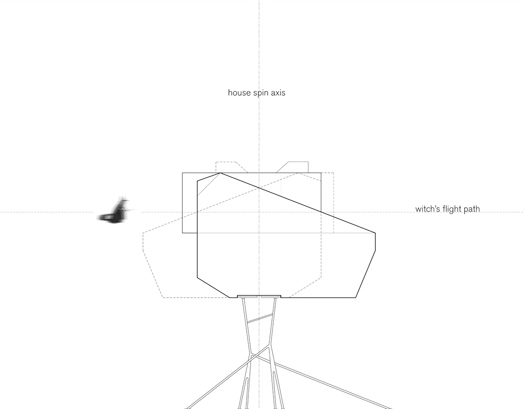 Yes, the witch gets a flight path. 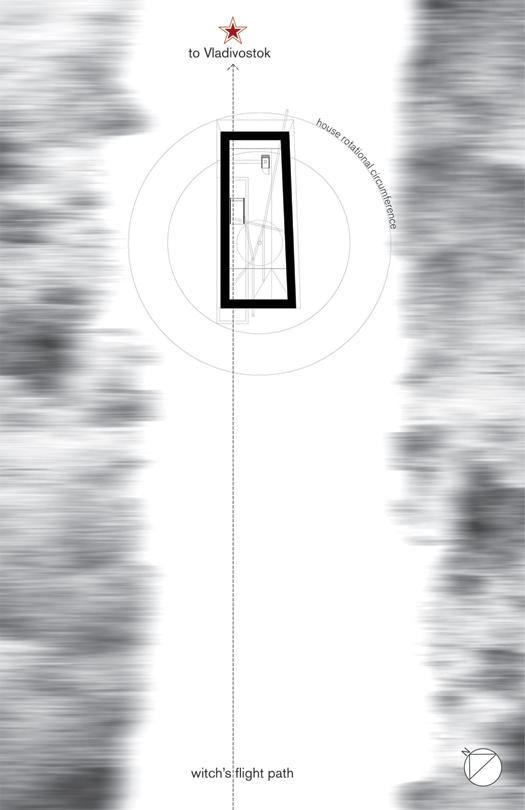 There are a few more images at the website, definitely worth a look. I hope they decide to do more.