I thought that's what God made pillows for?

Your face? That wasn’t made for smiling. Your hands? Not for holding! Research published today says our species has a more violent past than previously thought, to the extent that our ancestors’ faces were made to be punched.

In their paper Protective buttressing of the hominin face, published today in Biological Reviews, biologists David Carrier and Michael H. Morgan claim humans — particularly our australopith ancestors — evolved to endure a wallop. Although previous theories posited that the bones in our skull adapted to help us crush tough foods (like knuckle sandwiches), Carrier and Morgan examined synchronistic skeletal changes to show all early man wanted to crush was enemies.

The australopiths were characterized by a suite of traits that may have improved fighting ability, including hand proportions that allow formation of a fist; effectively turning the delicate musculoskeletal system of the hand into a club effective for striking […] If indeed the evolution of our hand proportions were associated with selection for fighting behavior you might expect the primary target, the face, to have undergone evolution to better protect it from injury when punched.

Carrier says, “the bones that suffer the highest rates of fracture in fights are the same parts of the skull that exhibited the greatest increase in robusticity during the evolution of basal hominins.” Facial features also evolved “at approximately the same time that our ancestors evolved hand proportions that allow the formation of a fist. ” 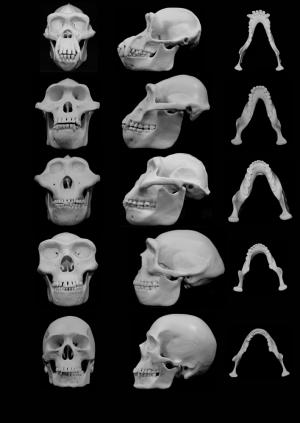 Evolutionary evidence that our ancestors were as violent as modern humans discredits the romanticized notion that we are just noble savages corrupted by the influence of civilization, but Carrier says it’s not all bad — truly understanding our species’ inherent savagery may help us rise above it:

Peace begins with ourselves and is ultimately achieved through disciplined self-analysis and an understanding of where we’ve come from as a species. Through our research we hope to look ourselves in the mirror and begin the difficult work of changing ourselves for the better.

We don’t need to punch each other anymore, okay guys? We have video games for that.

(via Phys.org, image via University of Utah, featured image via Thor 2)