Facebook’s New “Timeline” Interface Rolls Out to All Users Starting Today, Prepare for the Complaints 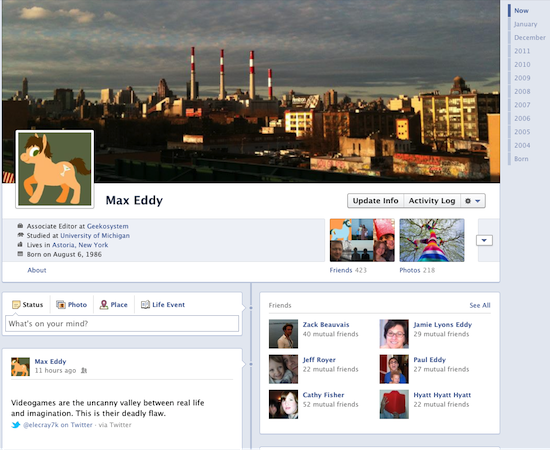 Announced last year, Facebook’s new Timeline interface is the largest change to its UI since the introduction of the Wall. For months, it was available only to developers and users who opted-in to the new layout. That changed today when Facebook announced that Timeline would begin rolling out over the next few weeks for all users starting today, and is guaranteed to spawn a myriad of “petitions” demanding its removal and a #timelinesucks tag on Twitter.

One reason that users might be wary of Timeline, besides Facebook’s notorious fear of change, is that the new interface allows easy access to long buried Facebook posts from years ago. Remember those halcyon days of yore? Back when Facebook was wild and free; when you could post anything you wanted because parents, employers, and loved ones couldn’t access the then-fenced-in social network. Are you starting to see how this could be a problem?

Fortunately, once a user’s account morphs into Timeline, they’ll have one week before the new interface is visible to anyone else. With that seven day grace period, users can peruse their old posts, weeding out what would now be embarrassing. Posts can either be deleted, made private, or viewable only to certain groups ala Google+ Circles.

Given that for some users Facebook contains eight years of social interaction, going through all those posts might be more than a bit daunting. Not to worry, as Facebook is rolling out a new Activity Log tool to help. Activity Log, which is not publicly visible, lets you quickly search through all Facebook activity and easily edit your Timeline.

Given Facebook’s history with personal information and dragging users along with drastic change, the useful tools and methodical roll out of Timeline is most welcome. And while some users are sure to be confused, and probably angered, by Timeline, it really is a better way to use Facebook. For the first time, your personal history with the site is easily available, realizing its potential as a digital scrapbook. With Google+ nipping at its heels, Facebook needs this kind of innovation.

Users who just can’t wait for Timeline to come to them can still opt in by clicking here.