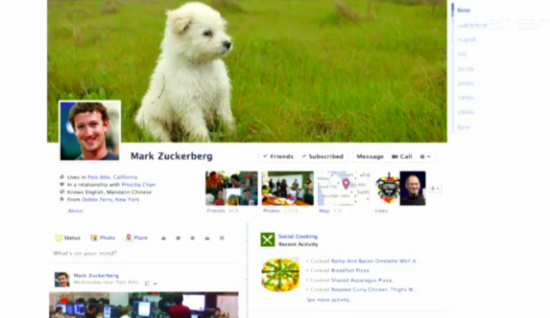 As you may be aware if you aren’t living under a rock, Facebook’s f8 conference was held today in San Francisco. During the conference, CEO Mark Zuckerberg made something very clear; there are some big changes coming down the pipe. The first and most striking, from a design perspective, is the Timeline.

The current (and previous) Facebook profile pages do a good job of representing your life in the recent past. While they present some static information like music you like, where you go to school, where you are employed, and so on, most of the information on your profile is very recent activity like status updates and posted links. The Timeline aims to change that by presenting information that aims to represent you as a whole instead of as the last few minutes or hours.

What is the Timeline, exactly? It’s the new profile page and it is different enough to warrant a new name. It can be broken down into three main parts, the first of which is the cover.

The cover takes the place of the top of your Facebook profile and features your profile picture along with a large picture (larger than any other picture you’ve seen on Facebook) that serves as a banner. It’s not a picture of you, necessarily, but can be. It’s meant to give people a good feel of who you are, what you dig, where you live, anything that you want it to convey. It’s the first thing anyone will see if your page and it’ll be prominent enough to really draw one’s eye. 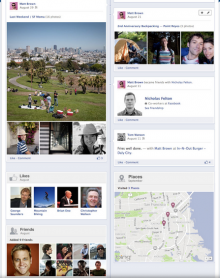 The next section is for your stories. This is where the more conventional stuff, the stuff you’re used to having in your profile, will show up. This will include your status updates, photos, Likes, friends, places, and all that jazz. The content is shown in tiles, almost like comic book speech bubbles, that originate from little grey dots sitting on a line the divides the page vertically: Your Timeline. You can hide and show each different tile by clicking on the dot from which it originates, tailoring your Timeline’s content to your taste. How it shows up initially depends on what Facebook decides is noteworthy for you. How it decides that is just as much of a mystery as ever. 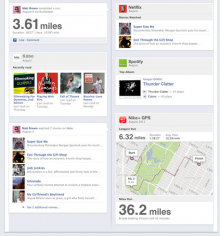 The last section is for apps. There are going to be a whole bunch of Facebook-endorsed social sharing apps. Companies like Netflix, Hulu and Spotify have buddied up with Facebook apps that will live here and share, in real-time, what you have been watching or listening to. These apps will allow you to share the various media you’ve been consuming (as well as other things) but they will not, however, allow you to share the actual media. For instance, the Spotify app will allow you to tell the world what you listen to on Spotify, but if a friend clicks to hear it, they’ll need Spotify too.

Along with the major Profile page overhaul, there is one more thing coming. The integration of the new Facebook social apps will finally introduce something Facebook has needed for ages: Verbs other than “is” and “likes.” The social apps will allow you share what you are watching, listening to, and just generally verbing by using the appropriate verbs. You don’t have to just constantly “like” things that you verb in other ways. Finally.

At the moment, Timeline is in beta and only available to developers. If you think it looks cool and want to try it out, you can get yourself on a list and Facebook will tell you when you can try it. Their plan is to roll it out over the next few months. A number of social apps were demoed at the conference and should be becoming available in the very near future. The Netflix app, however, has run into a bit of legal hurdle here in the states, so it’ll only be available to those outside of the U.S. for the moment. I’m sure they see it as a welcome deviation from the norm.

All in all, the new Facebook is a pretty radical departure from anything Facebook has done before. By now, we’ve become pretty accustomed to a backlash after every iteration of Facebook, but with this version, it’s hard to predict. Considering that Facebook will be changing so radically, users may not suffer from that horrible “it’s different, but only slightly different, so I get confused” frustration, not to mention the changes seem to lend themselves to a certain sort of exploration that could be fun. We’ll see if the Timeline and new social apps really revolutionize the Facebook landscape like Zuckerberg suggests they will, but I’m willing to bet that they actually will, and in a cool way, to boot.