Facebook Picture of Guy Siphoning Gas From Police Car Gets Him Arrested, As it Should’ve 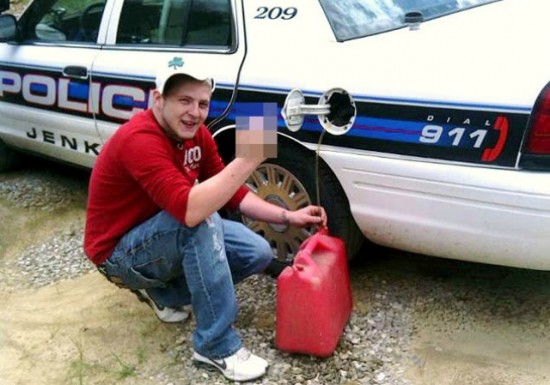 20-year-old Michael Baker was photographed siphoning gas from a Jenkins Police Department car in Kentucky, as seen above, because that’s what the cool kids do, I guess. For extra added cool, he flashed the finger in the picture, which he claimed his girlfriend took. According to his girlfriend, Joann Sandelin, the picture was meant to be what one may call a funny humor joke. The couple posted the photo to Facebook, which led to the arrest of Baker.

Baker spent the night in jail, and was charged with theft by unlawful tanking. Sandelin reiterated that the picture was only meant to be a joke, citing logic as the clear reason why it was a harmless act:

“Yeah, we’re sorry, but it was just a joke. I mean if we was going to steal gas, we wouldn’t put it nationwide on Facebook. We don’t steal anyway, but we’re sorry.”

“I got a little bit of gas. I ain’t gonna lie but not much. I couldn’t get much. I tried but there wasn’t much in it.”

Baker also said he wasn’t sorry for the act, if you’re wondering his level of remorse; the lengths people go to for comedy. So, next time you’re going to commit a crime for the sake of hilarity, at the very least don’t post a picture of it to Facebook with you prominently featured.