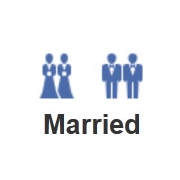 Just under a year and a half since announcing the option to proclaim a same-sex relationship on Facebook, the social network has now introduced new icons for those same-sex couples who get married! The new icons — two brides and two grooms (obviously) — will be featured on the Facebook Timeline when a user changes their status to “Married” and specifies that they are now in a same-sex marriage. Just in time for Facebook co-founder Chris Hughes to announce his own marriage to Sean Eldridge! Congratulations, gentlemen! Next: waiting to see an icon pop up on Anderson Cooper‘s Facebook page. We’ll go ahead and hold our collective breaths for that.

But you guys, this is so great! It’s like making up for Pride Month being only 30 days long! Better than a bonus second!

So, this is a very sweet and progressive thing of Facebook to do. One of those things that makes us forget that our privacy is disappearing by the day! While it’s a great new feature — to say nothing of being a necessary one, now that more and more same-sex couples are able to get married — there is a slight feeling of “what took so long,” when it seems like it would have been awkward to have a “Facebook-recognized” domestic partnership or civil union between people of the same gender represented by an icon with mixed genders. Fortunately, Timeline hasn’t been around too long for that to have been a long-standing problem. A problem, but not one that was going to stick around for very long. And that’s a good thing.

Facebook is no stranger to welcoming all and any, and in February 2011, they created the option to announce not just a relationship, not just a marriage, but a domestic partnership or a civil union. I think most of us would agree that this not only makes things a lot easier for couple in such relationships, but it’s also way better than announcing the existence of your bun in the oven when such an announcement might be premature.

Congratulations, Facebook! Always nice to see you’re changing with the times. Now, please stop changing your privacy settings and layout without telling us.