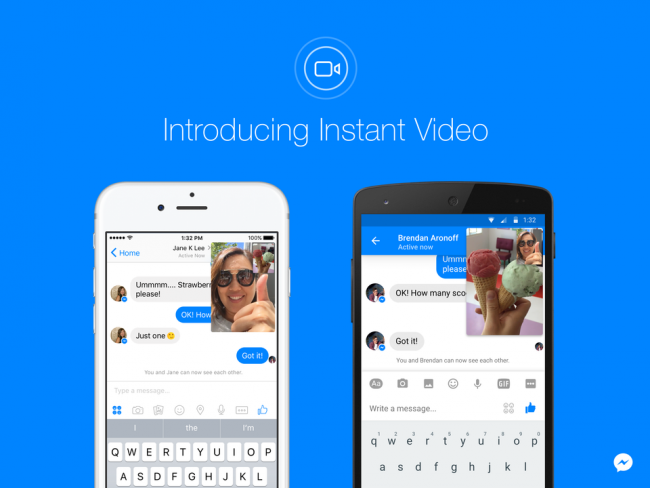 Facebook Messenger has already had a video-calling feature, but today they’ve announced an “Instant Video” feature that works a bit differently. It’s one-sided, which helps, since starting up an unexpected video call with a friend is likely to get you ignored and/or gently mocked. Instead, you can share a live video feed of what you’re doing, and all your friend has to do is sit back and watch. The sound will be automatically turned off on their end, unless they turn it on.

Facebook provides a few different examples of times you might use want to use this feature in their post about it. The one that stuck out to me as something I might use is shopping. But why would I use a live video instead of just snapping a quick selfie in the dressing room and sending it to a friend? Now, if I had a kid, then I could understand how creating quick one-sided videos and sending them directly to relatives would be fun, and a better way to send videos privately without having to bother attaching them to an email, or having to create a Facebook video post that is only visible to relatives, and so on.

Still, it’s not like Facebook is the only place where it’s possible to send other people videos privately and quickly. The app that springs to mind first for this would be Snapchat, which seems like the obvious comparison to draw when it comes to talking about instant video sharing. Even though Facebook’s video feature works a little differently, it still seems like an intentional move to edge in on Snapchat’s territory.

Instagram, which is owned by Facebook, introduced a “Stories” feature last month that bears a striking similarity to “Stories” on Snapchat. Now, Facebook is adding more video components to Messenger. Snapchat has definitely set the trend for short, private videos, and other apps are scrambling to catch up. It’ll be interesting to see which other apps start telling us to tell our “Stories” in short-form video style.