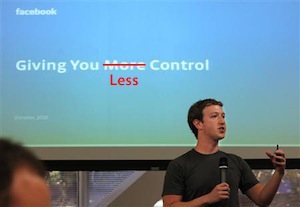 What was probably the biggest announcement at Facebook’s conference two days ago was an overhaul to their Groups, including a group chat feature and e-mail list. There’s a problem, though: Users can be added to groups by their Facebook friends without consent, an issue that saw Facebook founder Mark Zuckerberg added to a group ostensibly for NAMBLA, the North American Man/Boy Love Association.

Along with Zuckerberg, Mahalo founder Jason Calacanis and TechCrunch blogger Michael Arrington also would have appeared to have professed a sudden interest in young boys, thanks to pranksters on their (very long) friends lists. Deliberately shocking as the NAMBLA group may be, these additions highlight what’s arguably a shortcoming of Facebook Groups: Any Facebook user can go ahead and add any other user to a Facebook Group without any consent on the other user’s part so long as the two users are Facebook friends.

A Facebook spokeswoman commented on how to avoid the issue of friends adding you to unseemly Groups, which doesn’t really help if your friends are just a fun-loving bunch of pranksters:

“If you have a friend that is adding you to groups you do not want to belong to, or they are behaving in a way that bothers you, you can tell them to stop doing it, block them or remove them as a friend — and they will no longer ever have the ability to add you to any group,” she wrote in an e-mail. “If you don’t trust someone to look out for you when making these types of decisions on the site, we’d suggest that you shouldn’t be friends on Facebook.”

As the Groups feature stands, apparently one cannot opt out of the groups sign-up feature, which may be surprising, but coincides with Facebook’s goal of having the previously 5%-used Groups feature rise to 80% usage with the new Groups overhaul, in that forcing people to join groups without any way to avoid signing up could be a pretty good way to raise the percentage of Groups ‘users.’

People are also speculating that if the Groups feature doesn’t change to fix the issue, Internet marketing may become even more obnoxious (if you use Facebook) by having companies abuse the feature, and could also lead to misrepresentation regarding certain causes or movements in that people can just be added to those causes without their consent, creating numbers that wouldn’t accurately represent the movement’s supporters, something I hope Stephen Colbert becomes aware of before Facebook corrects the issue.